Serghei Tvetcov (Floyd’s Pro Cycling) gave the rest of the men’s UCI field a lesson in toughness Friday as he sailed through Tour of the Gila’s Stage 3 Tyrone Time Trial finish, shattering times with 33:21 — nine seconds faster than his winning time last year and after crashing the day before. 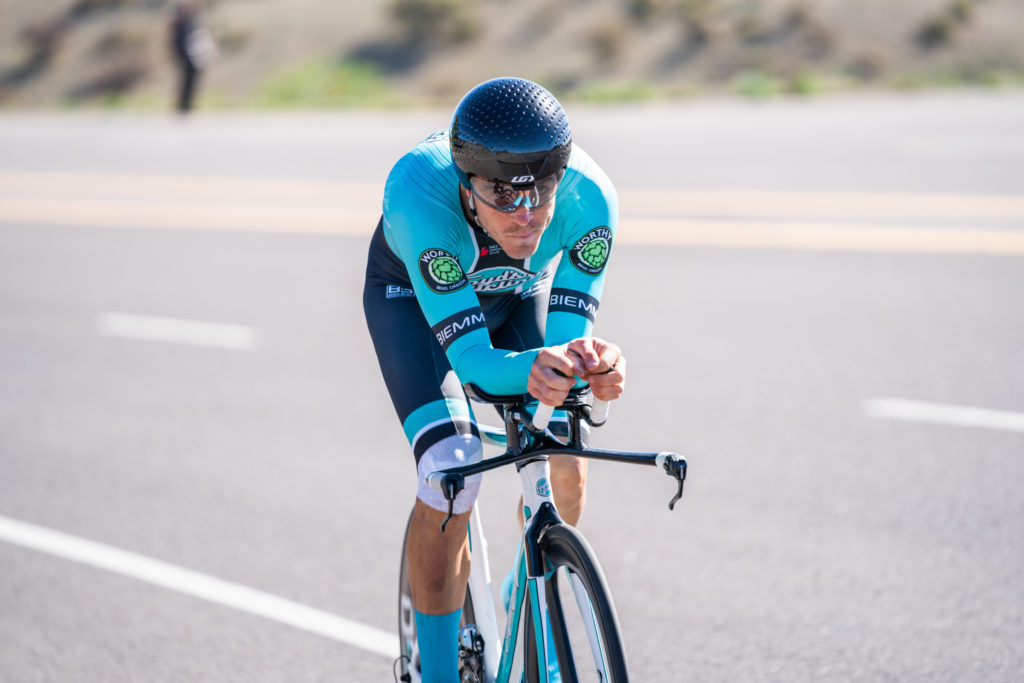 The Romanian wasn’t in contention for GC, but he put an exclamation point on his consistency for top finishes at Tour of the Gila — this is his third time trial win here. Canadian James Piccoli (Elevate-KHS Pro Cycling) extended his GC lead over Spaniard Oscar Miguel Sevilla Rivera (Team Medellín) to 46 seconds with a fourth-place finish.

“I felt great, I knew that course pretty good, but I’m not really sure about my feeling after crashing the first day,” Tvetcov said. “As soon as I finished, I saw my time, I beat my time [in the] previous year by nine seconds, so I thought probably for sure I’d be on the podium, so I’m really happy with Floyd’s Pro Cycling team for support and really looking forward [to the] next day, and [the] season.”

Tvetcov said he crashed at four kilometers to the finish during Stage 1. By then, he was out of GC contention and focused his efforts on delivering his teammates, Travis McCabe and Canadian Nickolas Zukowsky to the line in Stage 2.

His powerful effort on Friday moved him up 24 positions on GC from 48th to 24th, and he made up 39 seconds, putting him 5:47 back from the leader.

Meanwhile, teams waited for the rest of the field to finish as riders struggled to break the 34-minute mark. Eyes were on the final GC contenders to post times, and nothing would be set in stone until the final rider, Piccoli came across the line. 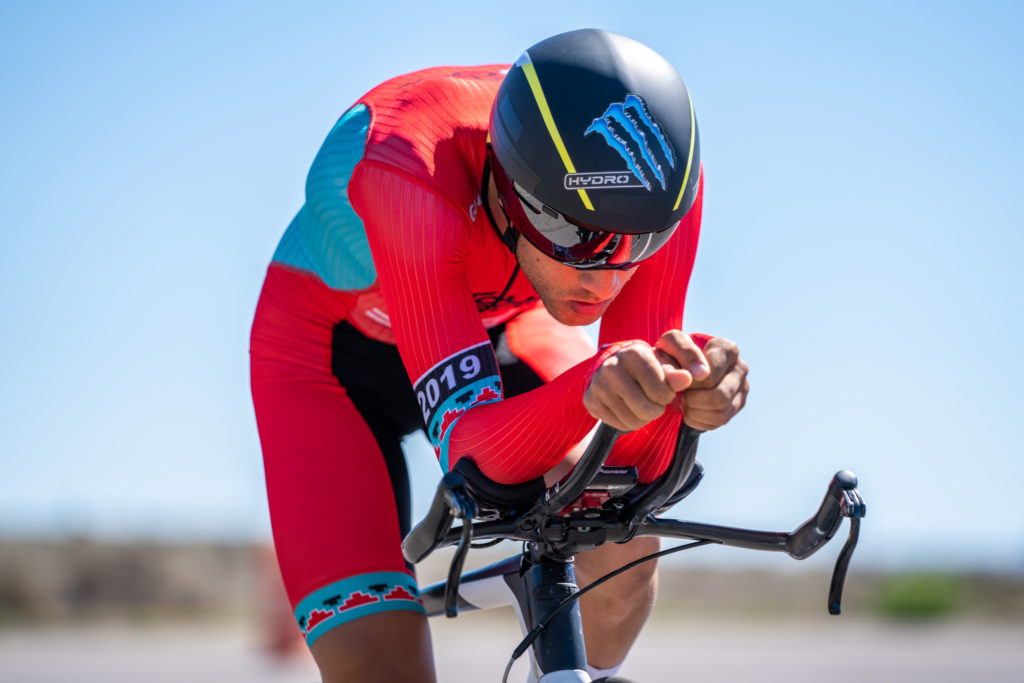 “This is definitely the second big test of the week,” Piccoli said. “I mean this race traditionally is set up on Stage 1, and then still have a good time trial, then keep it all together in the next two days. Really happy that I had a good ride today and that I could defend the red jersey. I think we really proved that we’re the strongest team here, so the rest of the week will be devoted to protecting the red jersey and hopefully putting on a good show at the criterium too.”

Piccoli’s teammates, Canadian Adam Roberge and George Simpson finished second and third, respectively, putting three Elevate-KHS Pro Cycling riders in the top four of the time trial results. Roberge took over third place on GC, moving up from 11th. He improved his overall time by 21 seconds, now 1:02 back from the leader, and swiped the Best Young Rider jersey from Zukowsky.

“It was very fun,” Roberge said. “I love this course. It was the perfect balance between uphill and downhill. It’s not too much for a climber, but you still have to be able to climb, and the conditions were just perfect. Normally it’s super windy here, and today I was on the bike and I was like, ‘that’s so fun.’ I can just ride my bike without thinking about holding myself up. Yeah it was a great day.” 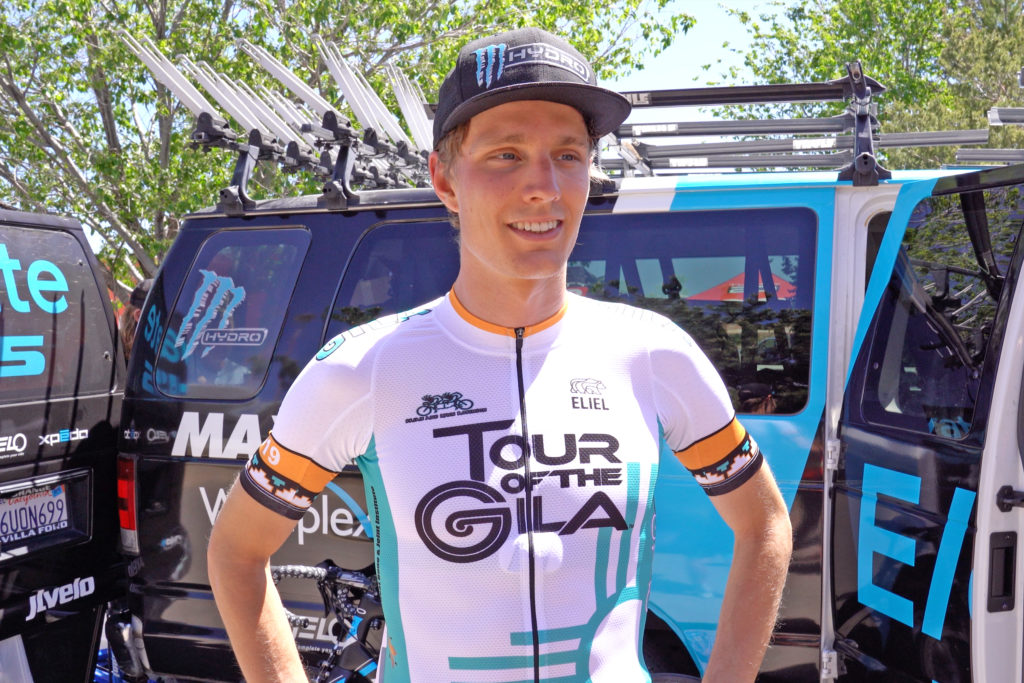 The previous third-place contender, Mexican Eder Frayre Moctezuma (Team California) fell to 10th, with a 2:57 gap to the leader. He lost a total of 2:46 on the day.

Zukowsky moved up to fourth on GC and sits 1:14 back, while Alex Hoehn (Aevolo) moved up to fifth from eighth and is 1:48 behind.

Another notable finisher was Canadian Travis Samuel (DCBank Pro Cycling), who finished fifth on the stage with a time of 34:10. Samuel has been ubiquitous at this year’s Tour of the Gila, appearing in breakaways, going for sprint points and now finishing in the top five at the time trial.

The teams will head into Stage 4’s Downtown Silver City Criterium presented by The Town of Silver City on Saturday, looking for time bonuses on three sprints and the finish line, hoping to gobble up precious GC seconds heading into the final Gila Monster stage on Sunday. 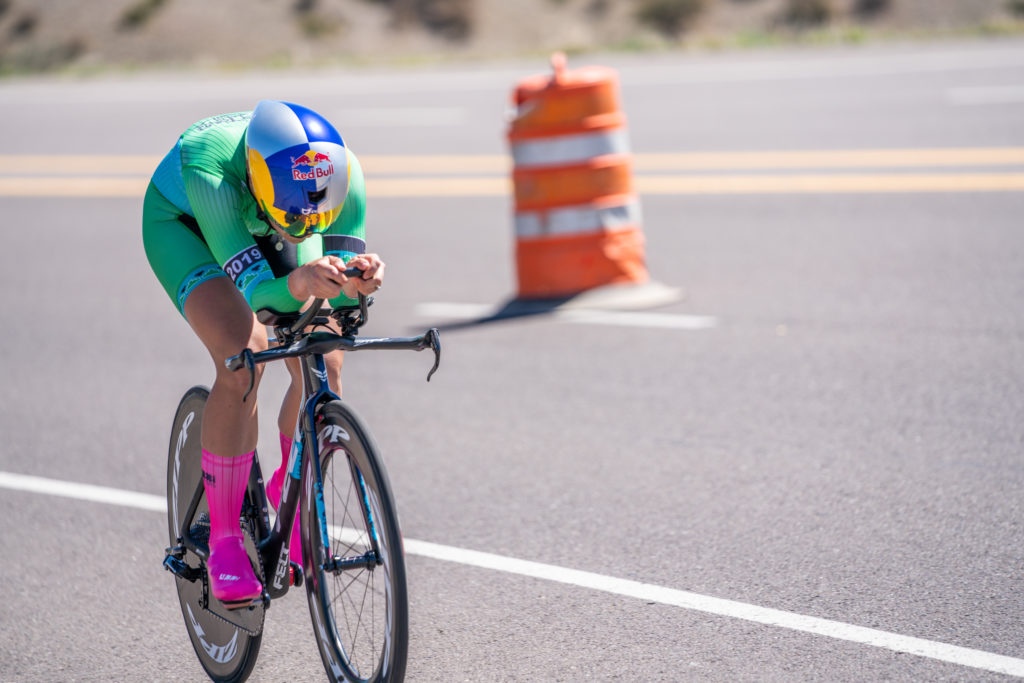 Chloé Dygert Owen (Sho-Air TWENTY20) rocketed into the finishing chute Friday in Tour of the Gila’s Stage 3 Tyrone Time Trial with a top time of 37:47, blowing the rest of the field’s times to smithereens and leapfrogging general classification standings from fifth to second.

She now sits behind Australian Brodie Chapman (Team TIBCO-Silicon Valley Bank), the only rider who came within one minute of Dygert Owen’s time. Chapman’s efforts paid off; she reclaimed the top GC position with 14 seconds to spare on Dygert Owen.

“Today was a great day, I talked to my coach, had a game plan going into it, what kind of watts to hold, to really work on my position and everything and try and stay as aero as possible,” Dygert Owen said. “So, pretty close to the leader’s jersey for me tomorrow. It’s going to be nice having some of those bonus seconds in the sprints and having the finish for bonus seconds. So hopefully we can get the leader’s jersey back on our team tomorrow and then hold it strong for the final day.”

With a UCI women’s field stacked with talent spread across multiple teams, riders knew the time trial would be telling. And Dygert Owen, who had been collecting time bonuses on most of the intermediate sprints at Tour of the Gila, gaining a total of eight seconds so far, was ready to pounce.

Going into the time trial, she was sitting fifth on GC, down 1:02 from the leader — her teammate, Canadian Jasmin Duehring. She was 50 seconds behind Chapman.

Dygert Owen’s time set a blistering standard for the remainder of the field, nearly two minutes ahead of nearly the entire field when she sailed across the line in near perfect weather conditions. Team TIBCO-Silicon Valley Bank, Femme Équipe p/b Swisse Wellness and Rally UHC Cycling were sitting on pins and needles waiting for their top GC contenders to post times.

But only Chapman came within striking distance — 36 seconds behind Dygert Owen — and took back the top spot from Dygert Owen’s teammate, Duehring, keeping Dygert Owen at bay by 14 seconds. 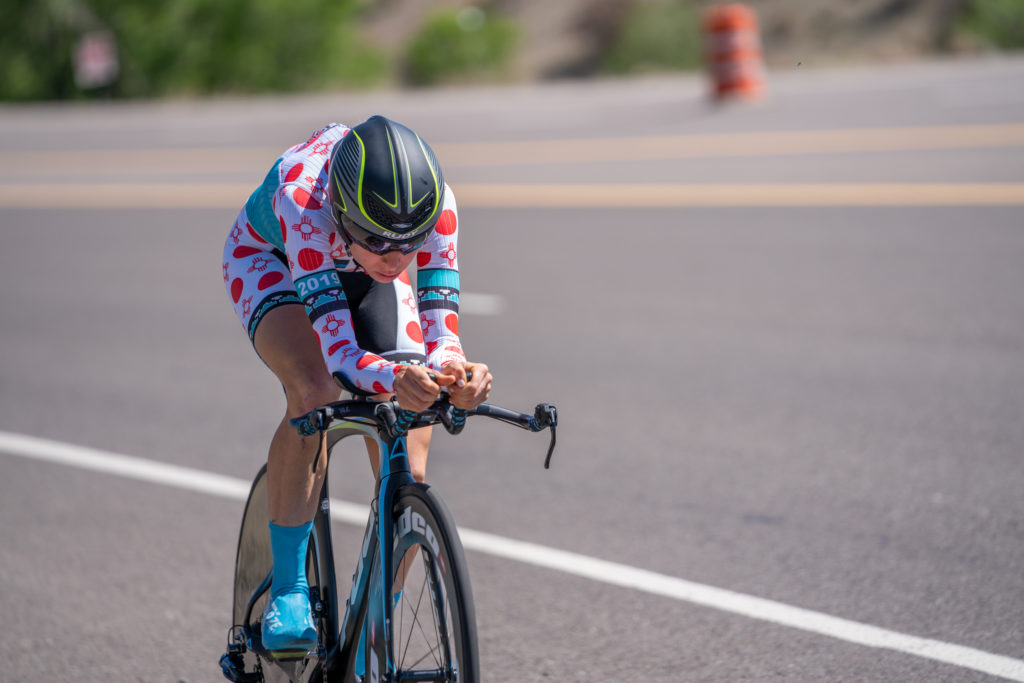 “It’s good, I feel really good,” Chapman said. “Like I was saying before, coming in second to Chloe Dygert is like a win to me. I know she’s really experienced and super strong, and she’s been to the Olympics —that’s so cool — so I was just trying to go as fast as I could out there without blowing up, and that’s what I did.”

Now it will be up to Team TIBCO-Silicon Valley Bank to defend Chapman’s jersey while Dygert Owen and Duehring are breathing down their necks.

In Friday’s Downtown Silver City Criterium presented by The Town of Silver City, three sprint bonuses and a finish line bonus are up for grabs. If Dygert Owen wins all of those time bonuses, she would gain a total of 19 seconds, putting her in the leader’s jersey going into the final Gila Monster stage on Sunday. 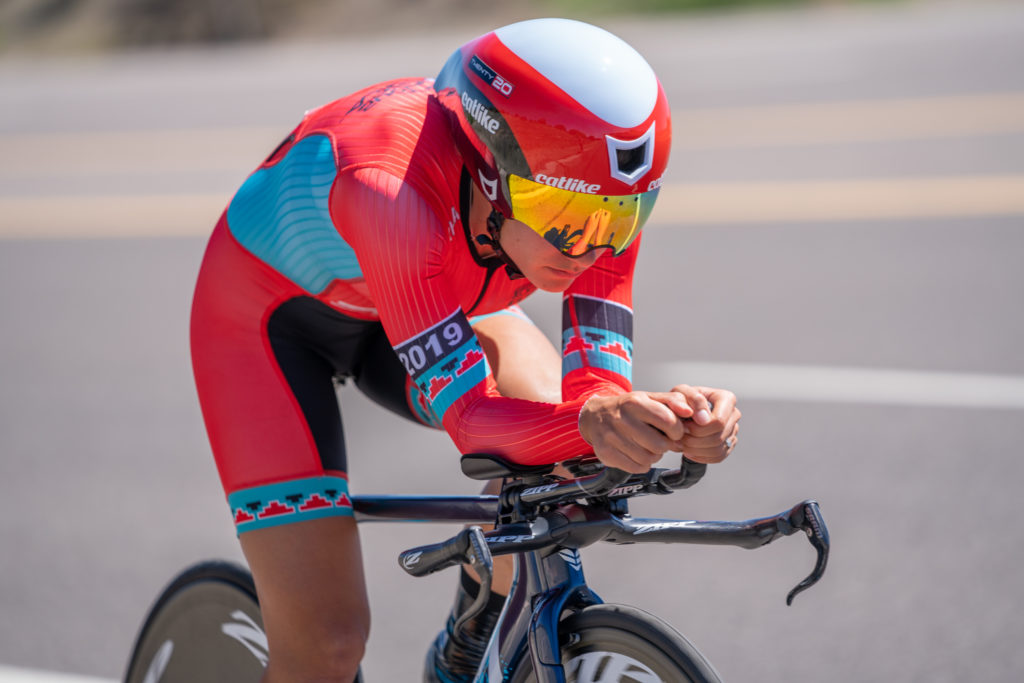 “It’s the perfect position to be in and what we were really hoping for today,” Duehring said. “Sunday is one of the hardest races in the year, and it really comes down to how many cards you have to play and it’s not just myself and Chloe that are up there. We had five girls in the top 10 today and that shows not just the strength of our team, but we have a lot of cards to play on Sunday, and we’re going to definitely be fighting as a team for that win, so it doesn’t matter who it is that stands on the top of the podium at the end of Sunday as long as it’s our team.”

“Win,” Chapman said. “Obviously retain red [leader’s jersey] which is winning, but I think have fun and ride within myself and it’s all I can do. America is like the home country of crits. It’s like the pièce de résistance of crits, so I would love to just race American crits. It would be fun. It’s going to be hard.”