Dygert Owen robs lead from Chapman, has 1-second lead on GC after Tour of the Gila Stage 4 crit

Home/Race News/Dygert Owen robs lead from Chapman, has 1-second lead on GC after Tour of the Gila Stage 4 crit
Previous Next

Dygert Owen robs lead from Chapman, has 1-second lead on GC after Tour of the Gila Stage 4 crit

Chloé Dygert Owen’s relentless efforts to pick up time bonuses throughout Tour of the Gila finally paid off Saturday in primetime as she robbed the general classification lead from Brodie Chapman (Team TIBCO-Silicon Valley Bank) at the Downtown Silver City Criterium.

The Sho-Air TWENTY20 rider, Olympic silver medalist and world champion surged to the line first during every sprint bonus opportunity, with Chapman sticking to her like glue every time for second-place bonus seconds in an effort to protect her lead.

“Our plan was to get the red today, and we did, but we weren’t going to be too bummed if we didn’t get it, and there’s seconds tomorrow too, so overall it was a super great day,” Dygert Owen said. “It was definitely the blue train. We were totally covering everything, and we made a statement out there today. Super proud of the girls — they just did a great job for me, and now we’re in red and hope to keep it tomorrow.”

Friday’s crit saw big action from start to finish by Hagens Berman | Supermint, who launched consecutive attacks throughout the race, led by Lindsay Goldman, Starla Teddergreen and Liza Rachetto on the back side of the course.

“We love to be aggressive; we love crits,” Goldman said. “This is our favorite day of any race, so the plan is always to go out and animate the race. We don’t really have a lot of fun sitting in, and it doesn’t make for very interesting spectating, so our goal was to be aggressive from the beginning. We had a few plans around that to make certain that our attacks were tactical and played to our strengths, and really did the best we could to make the most of the energy that we were expending.” 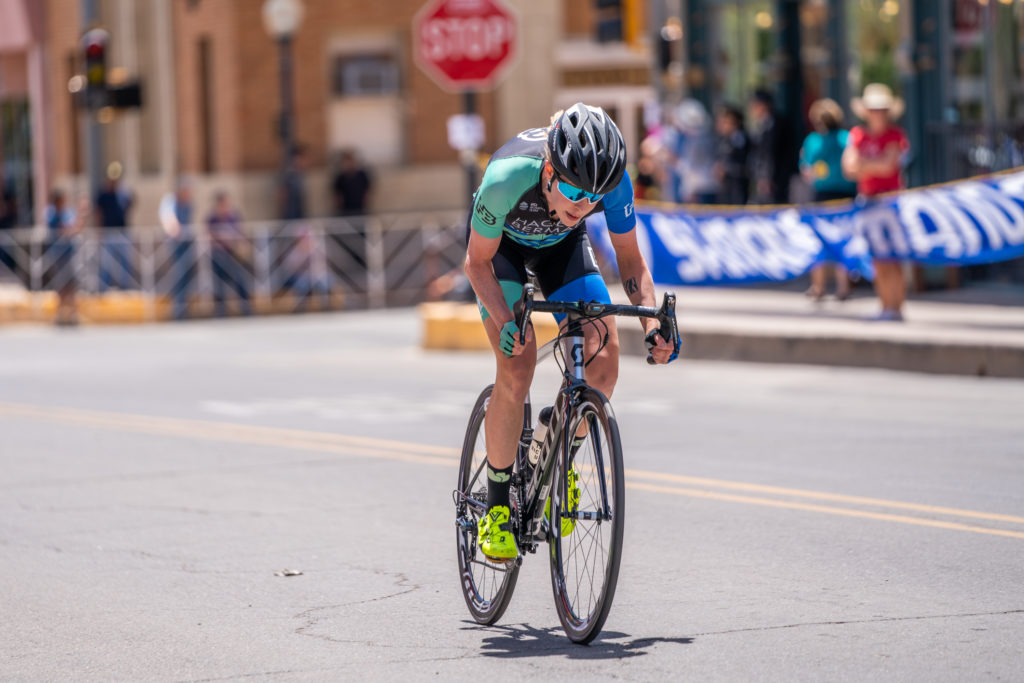 Meanwhile, Dygert Owen’s team covered those attacks to give her every opportunity to pick up time bonuses. Leading up to the crit, Dygert Owen had gained time during intermediate sprints on Stage 1 and Stage 2, landing her in the Sprint Leader’s jersey. She then won Friday’s time trial with a blazing finish that dug minutes into most of the field and helped her leapfrog from fifth to second place, down just 14 seconds on GC.

Dygert Owen was on a mission — and she swept the sprints for maximum time, adding up to nine seconds. Each time, Chapman softened the blow by picking up second-place time bonuses for a total of six seconds.

But Dygert Owen’s final knife came at the finish line. She outsprinted the entire field by two seconds in addition to picking up the 10-second bonus. Dygert Owen gained a total of 21 seconds at the crit to Chapman’s six, which put Dygert Owen ahead in GC by one second.

“We definitely went into it with a couple plans of knowing, say this happens, then we’ll back off,” Dygert Owen said. “Like I said earlier, it wasn’t a super big deal if we didn’t get the jersey today. It ended up working out. We have a super strong team and it just never came to that point … just super proud of the girls.”

Chapman, although frustrated by losing the leader’s jersey, said the course and competition was fun.

“It was really fun trying to go to the line with Chloe on all those intermediate sprints — I’m not going to lie — I didn’t back myself in a sprint against her,” Chapman said. “Unfortunately for myself, I felt that I hesitated in the final a bit and should have played to my strengths more, but yeah we’re absolutely ready to fight for it tomorrow. Win the race.” 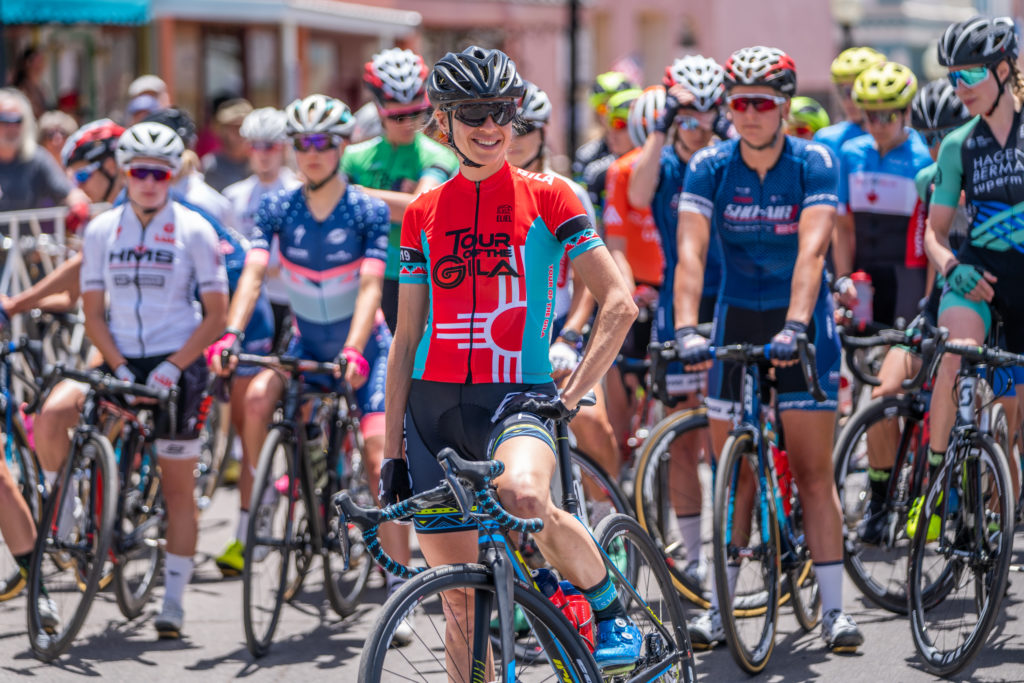 Now in a virtual dead heat for GC and 5,610 feet of elevation gain ahead of them Sunday in the Gila Monster Road Race presented by SkyWest Media, Sho-Air TWENTY20 and Team TIBCO-Silicon Valley Bank will prepare for an all-out fight for the leader’s jersey up the infamous climbs north of Silver City. Two sprint bonuses are available, too.

Although all eyes will be on Dygert Owen and Chapman, this field of heavy hitters isn’t going to sit idly by when the mountains await. Dygert Owen’s teammate, Jasmin Duehring, is sitting in third place with a one-minute and 14-second deficit. Edwige Pitel (Femme Équipe p/b Swisse Wellness) is one minute and 53 seconds back, and former U.S. National Hill Climb Champion Krista Doebel-Hickok (Rally UHC Cycling) is in fifth, down two minutes and 58 seconds.

Dygert Owen pointed out that her team, Sho-Air TWENTY20, has five riders in the top 15 on GC.

“We have a few girls right up there on our team, so anything can happen, and we have a few cards to play so it’s not just about me,” Dygert Owen said. “We’ve got [Jasmin] up there, Emma, and everything, so we’re just going to really work hard to maintain that red jersey even if it switches throughout the team.” 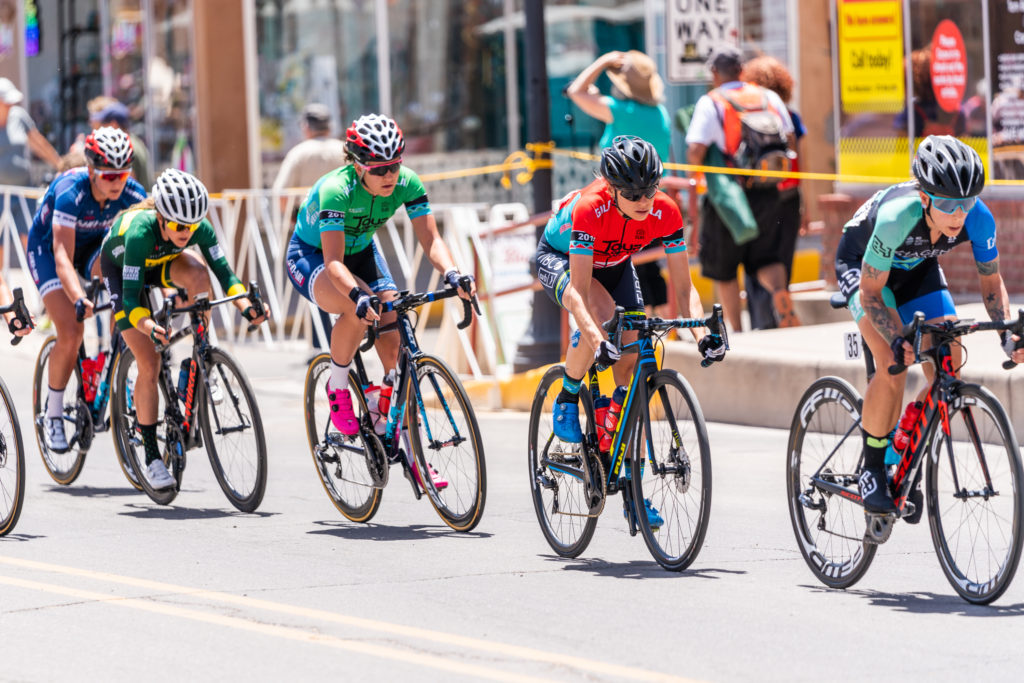 In the last four years, the Gila Monster stage winner has crossed the finish line an average of 26 seconds ahead of the second-place finisher on the stage. In two of those years, Olympian and multi-time Tour of the Gila GC winner Mara Abbott was the victor.