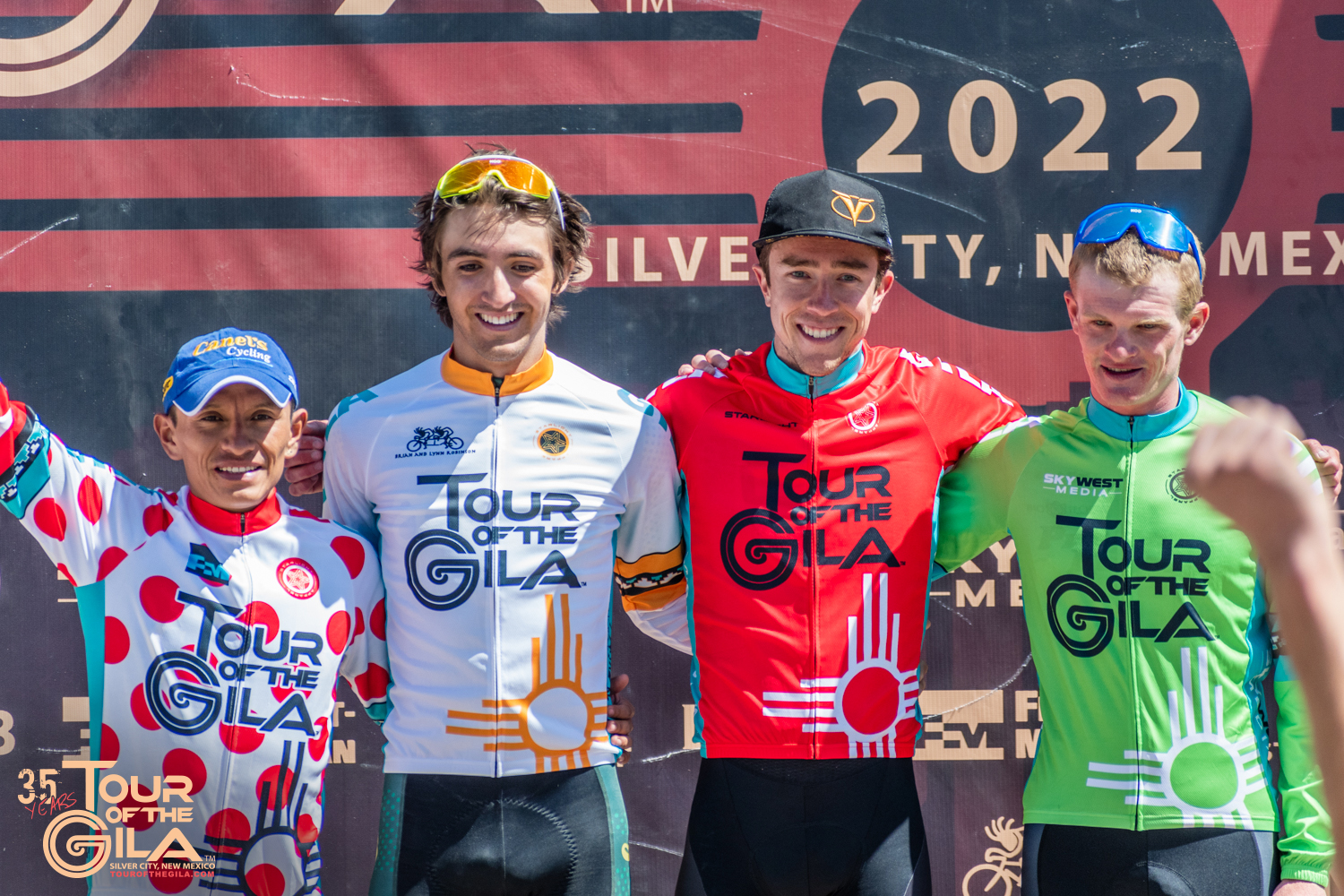 Sean Gardner (CS Velo) rocketed to the top step of the overall podium Sunday at the UCI Men’s Tour of the Gila in upset fashion while Eduardo Corte Cordero (Canel’s ZEROUNO) and his team slayed the Gila Monster and took the stage win.

Gardner, an Everesting world record holder, ascended from eighth into the red jersey after fending off countless attacks from three Canel’s ZEROUNO riders in the last few miles – and the last climb – of Stage 5.

“At the base of the Gila Monster, three of the Canel’s guys – I just followed their wheels – they lit it up at the bottom, and then we got a gap and we just tried to hold on until there,” Gardner said. “They were flinging some attacks on this last little rise, and I did my best to hold on.” 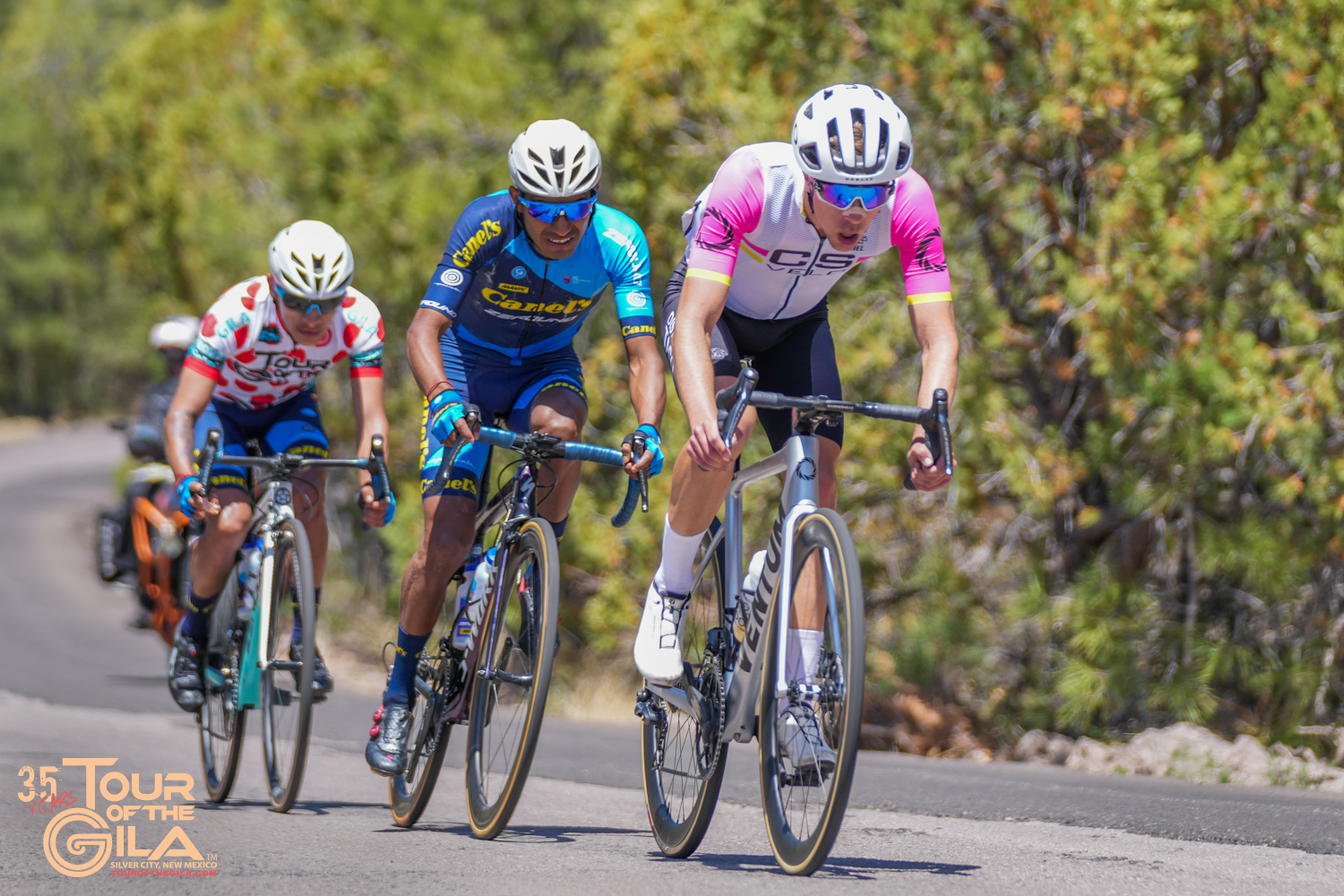 Sean Gardner battles with Canel’s ZEROUNO riders toward the finish.

Gardner said he had no idea he had won the red jersey when he crossed the finish line, and most assumed Matteo Dal-Cin (Toronto Hustle), who wasn’t far behind on the climb, had retained it.

“It turns out I only got it by four seconds,” Gardner said. “The team was riding strong all day and was able to fight at the end and hold onto the Canel’s team. They were riding strong too. [We] got the overall GC …, so I’m pretty hyped.”

Heiner Parra Bustamante from Colombia, the king-of-the-mountains leader, Efren Santos Moreno and Corte Cordero from Mexico, all on Canel’s ZEROUNO as well as Gardner and Toby Roed (Yoelo Test Team p/b 4MIND Project) from Norway, who was sitting third on GC, got away from the main field, showcasing their endurance, climbing abilities and strategy.

Attacks started flying from the gun in the 100.7-mile Stage 5 Gila Monster, which has four king-of-the-mountains climbs. A break of nine riders formed and although it broke up several times, several of its original members, none realistically in contention for the overall lead, stayed away for a total of about 75 miles.

But the group whittled down to three riders with about 30 miles to go – Monk, Klein and Hardin – after other riders in the break cracked, with one even getting off his bike and laying on the ground.

The peloton, which carried all of the jersey competitors, then amped it up, and the chase was on headed toward the final two climbs. Breakaway riders were swallowed up, and five riders went on the attack. 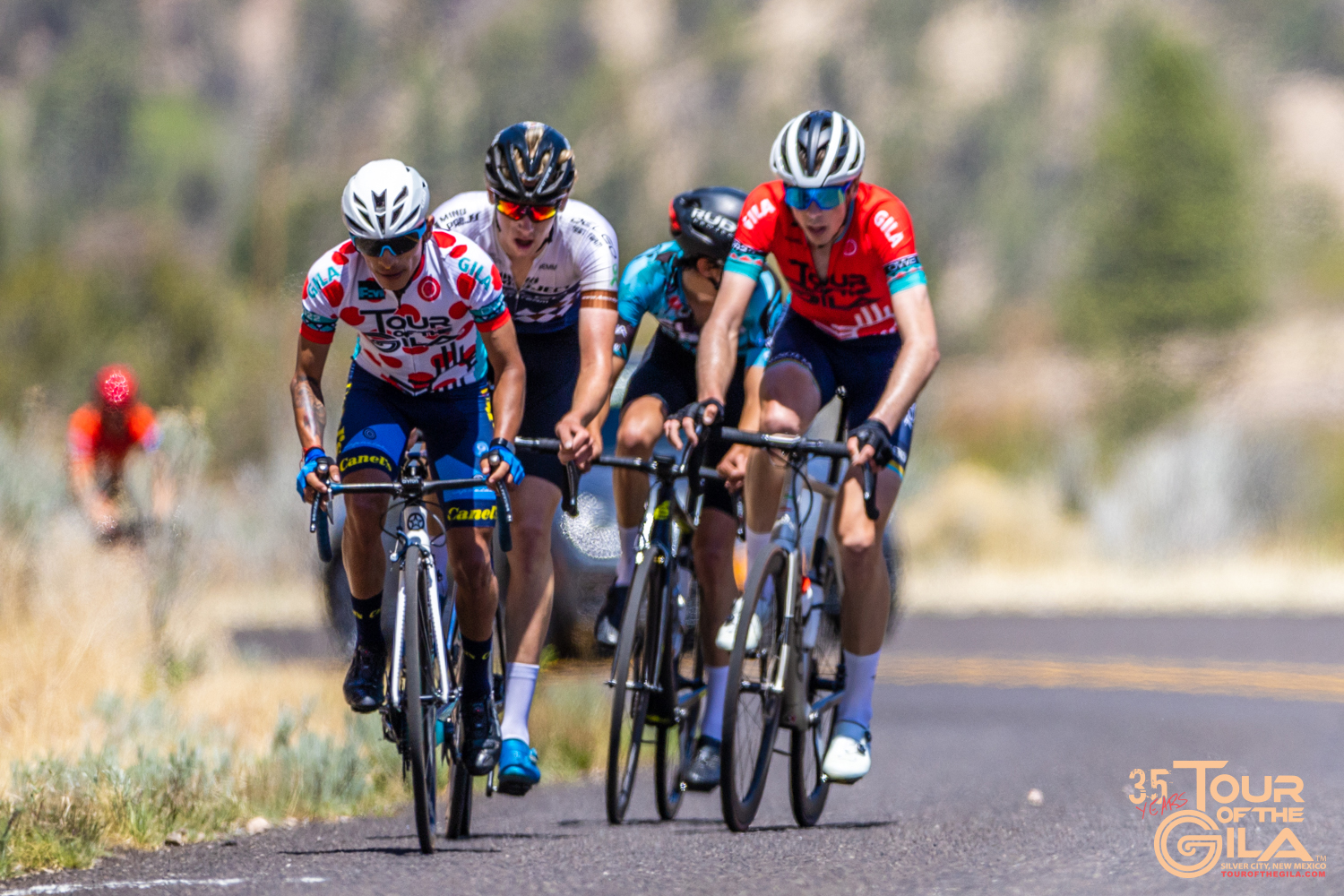 Canel’s ZEROUNO put on a tactical training camp as they launched consecutive attacks and broke Roed. They tried to shed Gardner, but he fended them off until the last climb to the finish with Parra Bustamante and Corte Cordero riding away. Santos Moreno didn’t have enough in the last 500 meters for a Canel’s podium sweep, and Gardner took third on the stage with enough time to be awarded the red jersey and the overall lead.

“I’m really happy with the stage today,” Corte Cordero said in Spanish. “We knew it was the queen stage, and we knew it would be a lot of climbing. I’m really appreciative of our entire team – the job they did was impeccable. I want to especially mention Efren who did his job and Heiner and Nacho and all of my teammates. We knew we had to move on this stage because it would be the defining stage. We attacked and we found an opening, and we won the stage, and we’re happy for it.” 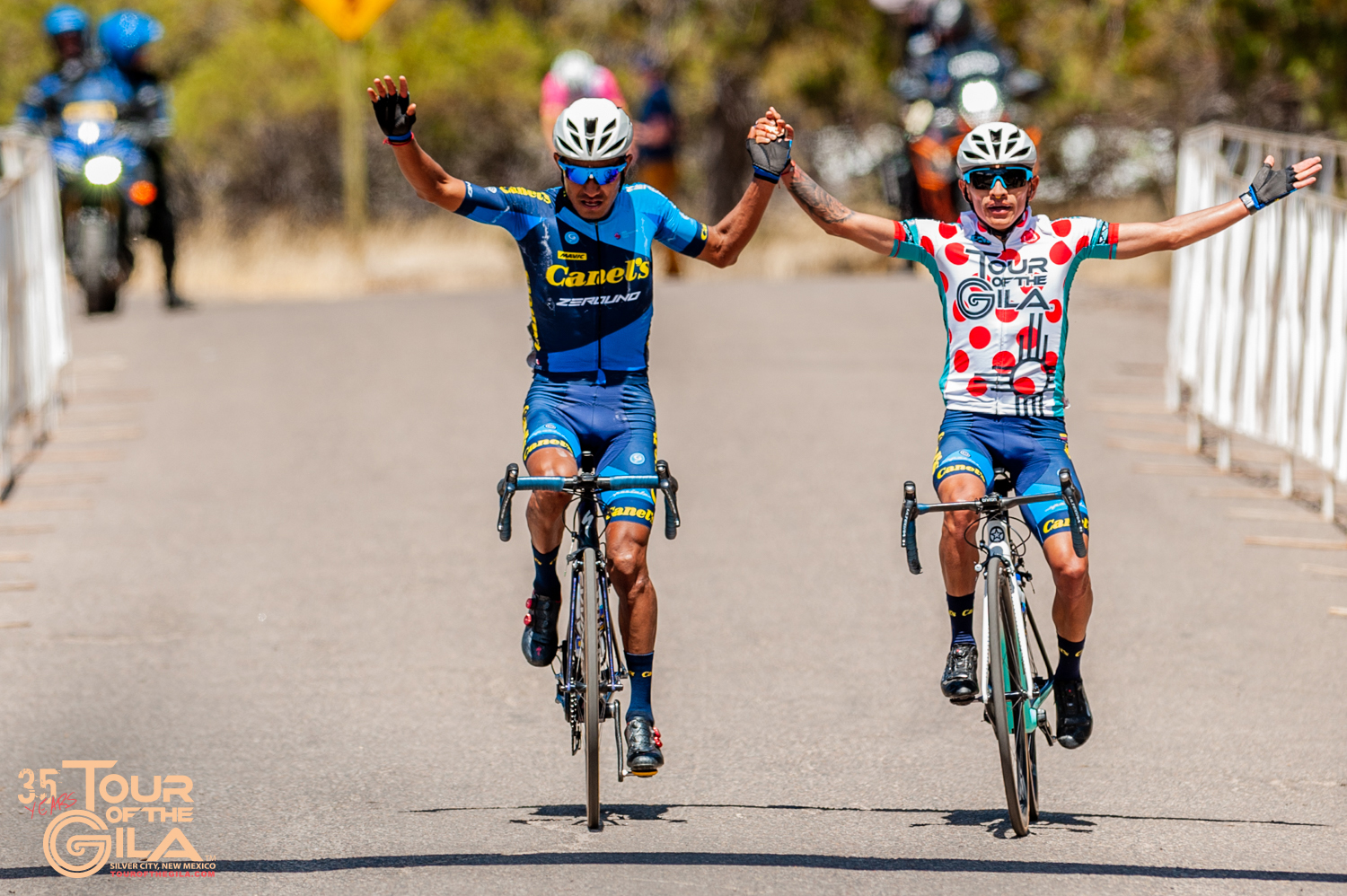 Meanwhile, Tyler Stites (Project Echelon Racing), who was 34 seconds down on the overall lead, couldn’t bridge up enough to make up any time and ended up in 10th overall, but still winning the green Sprinter jersey. Dal-Cin came in second for the overall, just four seconds back from Gardner. Roed took third on GC, while Landis/Trek’s Sam Gilletly finished just shy of the podium for the overall race lead in fourth. 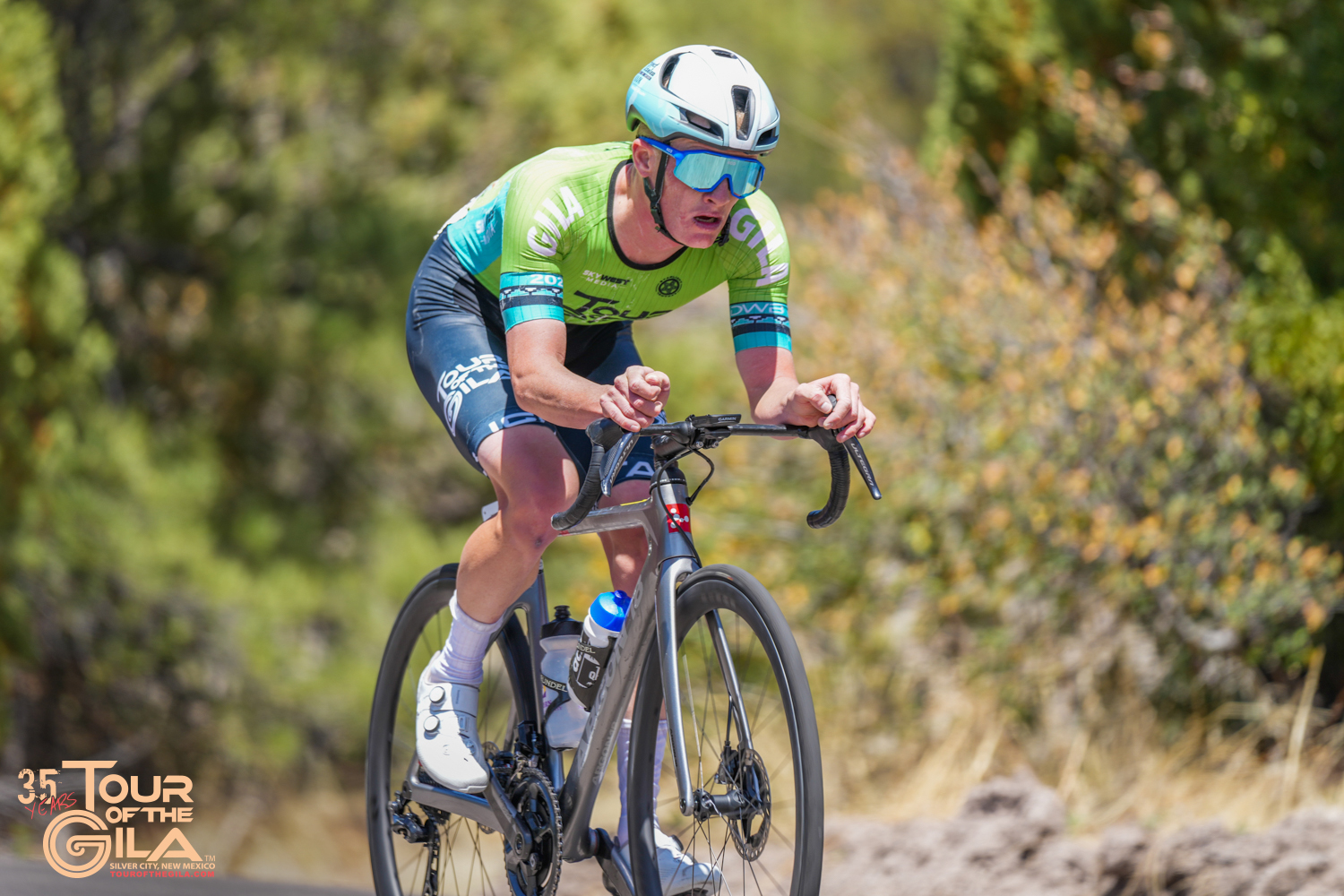 Jared Scott (Aevolo Cycling) managed to make up the eight-second deficit he had on the white Best Young Rider jersey to finish with it on his back, and Parra Bustamante retained the polka-dot, King-of-the-Mountains jersey.

“I’m super proud of the guys – they hung it out there for me today all across the board keeping the break in check, pacing up the climbs, making sure I was fed and watered,” Dal-Cin said. “Halfway up the Monster there, I think two or three of the Canel’s guys and Sean hit out, and I was really cramping up really on the ropes so I just did my best to ride my tempo and hope I could rally at the top and maybe my legs would come around. I was nursing some pretty good cramps. I gave it everything in the chase and I was so spent in the end. No complaints, left it all on the road and the stronger man won today.” 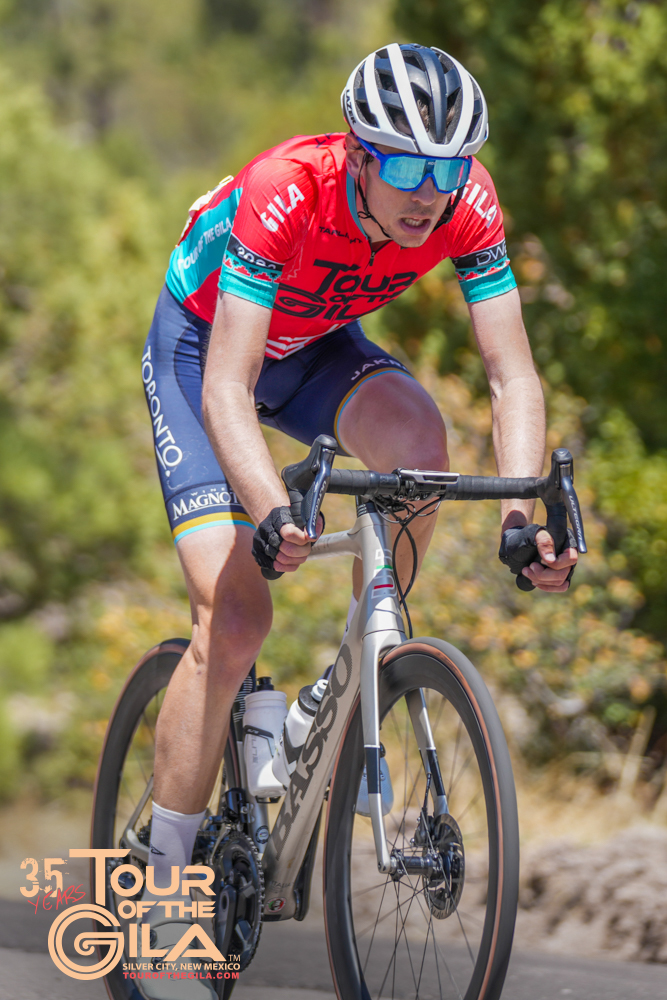