Colombian Cristhian Montoya Giraldo (Team Medellín) proved his reign over the King of the Mountains jersey Sunday on the queen stage of Tour of the Gila, but his team’s efforts to disrobe Canadian James Piccoli (Elevate-KHS Pro Cycling) of the leader’s jersey were unsuccessful.

Piccoli and Elevate KHS Pro Cycling held strong to keep the general classification lead he secured in Stage 1 and expanded on in Stage 3.

“We’re very happy,” Montoya said in Spanish. “We had the best team on the day and we had intentions of doing something great today. We were sitting in second with [Oscar Miguel Sevilla Rivera] and the KOM jersey, and the team classification was very important to us. These climbs on this stage were so demanding and we were trying to work for Sevilla in second place on GC, and I was going for the stage. I had the mentality going into it, and I like racing in stages like this.” 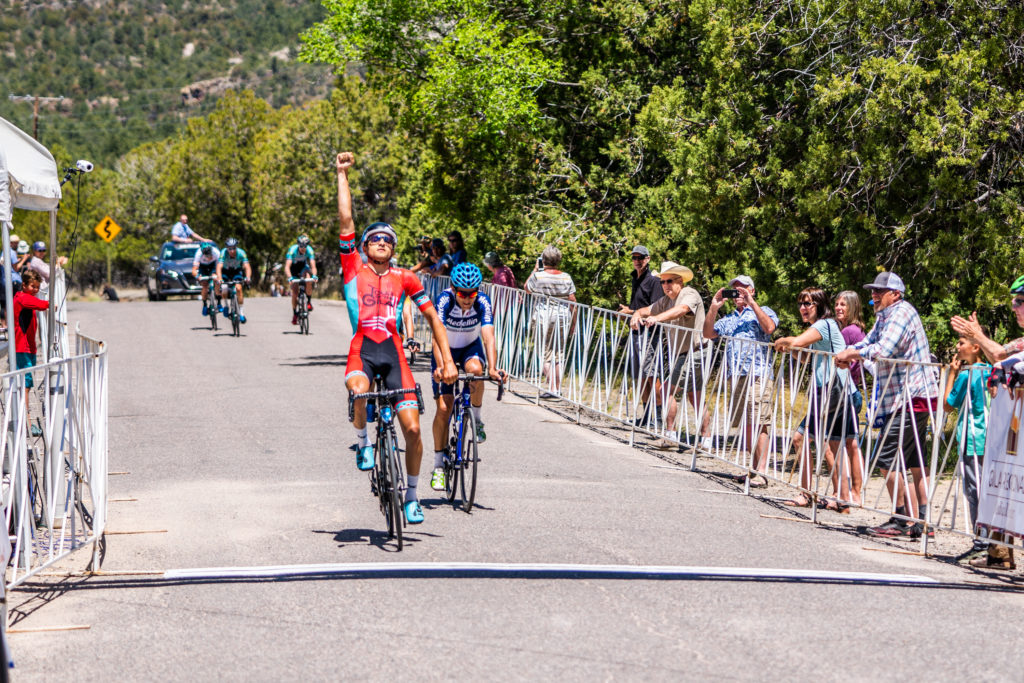 Piccoli said it’s surreal to be in the leader’s jersey even though he’s held it throughout the five stages.

“This stage is so hard,” Piccoli said. “I’ve said it’s the hardest stage in North-American bike racing, and I believe that’s true, so it’s really hard to count your chickens before the stage is over, before you actually cross the line, and there were a couple of moments today where there was definitely some pressure. So to cross the line and have the overall victory of the Tour of the Gila is really, really special.”

The 100.6-mile Gila Monster Road Race presented by SkyWest Media climbed more than 9,000 feet, and right out of the gate, attacks began to fly. But nothing stuck until the field came closer to the first intermediate sprint.

By then, a three-man break had established with a 30-second advantage. Travis McCabe (Floyd’s Pro Cycling), who was two points down from Michael Hernandez (Aevolo) for the Sprint Leader’s jersey, attempted to bridge, dragging Hernandez with him. It didn’t work, and Canadian Travis Samuel (DCBank Pro Cycling), who was in the three-man break, picked up first place points, helping him leapfrog Canadian Nickolas Zukowsky (Floyd’s Pro Cycling) to move him up to second place in the overall sprint competition.

Although McCabe would spend a short stint in a break, he ultimately failed to stay there for the next intermediate sprint and eventually DNF’d, leaving Hernandez with the Sprint Leader’s jersey, his first UCI jersey win of his career. 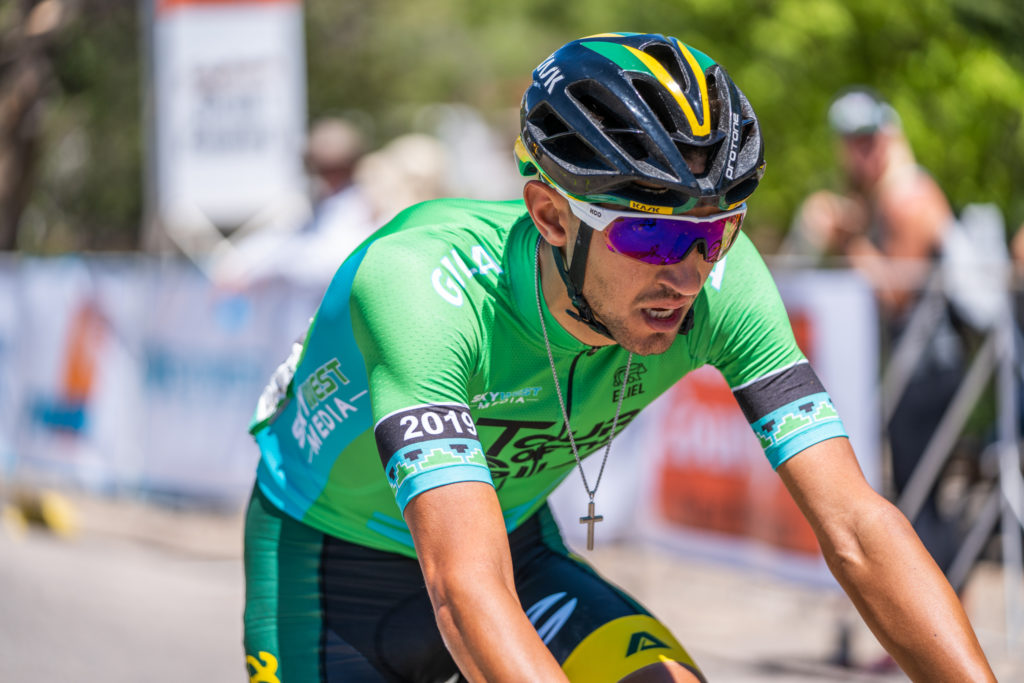 “It was really a two-up race, as long as I finished today,” Hernandez said. “Travis [McCabe] was the only person that could beat me in points, so I knew I had to mark him out, and my hope was that a break would go and the points would get absorbed, with either me in it or without Travis was the main goal. It worked out pretty well.”

The seven would stay away for 40 miles until Villalobos soloed away from the group up a Category 1 climb that determined the rest of the riders’ fate.

Back in the main field, Montoya made his move, rapidly accelerating up the same climb to join Villalobos and opening up nearly a one-minute gap on the peloton. With 18 miles to go, Romanian Serghei Tvetcov (Floyd’s Pro Cycling) bridged the gap the three began working together.

But with 15 miles to go, the field caught the break as they surged for the fourth KOM. With one kilometer to the KOM, Montoya attacked again with Alex Hoehn (Aevolo). Montoya, already wearing the polka-dot jersey, tacked onto his KOM lead with first-place KOM points.

The two established at most a 50-second lead as the kilometers ticked down. Hoehn, who was looking to move up from fifth place on GC, drove the pace most of the time as Montoya sat on his wheel. 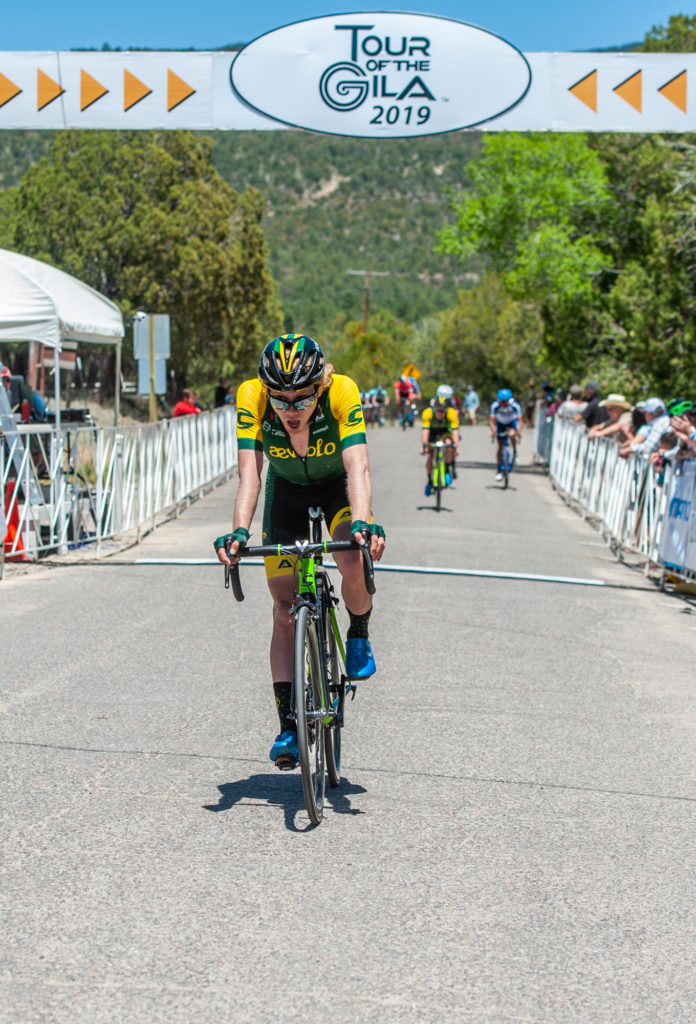 “I saw Luis up the road, and Gabriel, and by the time we caught Luis, people were just looking around not knowing what to do, and was like, ‘well, I just have to throw everything to the wind, if I’m going to try to get on the podium and take a jersey, I just have to do something big’,” Hoehn said. “I can’t just attack with 500 meters to go and expect to put 40 seconds into the guys.”

But as they continued to climb toward the finish, their advantage rapidly decreased, as what was left of the peloton chased after them.

With one kilometer to go, the field was 15 seconds in Montoya’s and Hoehn’s rearview. At 500 meters to go, Montoya hit the gas, and Hoehn couldn’t match the Colombian climber’s efforts.

Montoya posted up across the line, followed by Hoehn, then Hoehn’s teammate, Tyler Stites. Both moved up on GC – Hoehn to fourth, and Stites from sixth to fifth.

“I felt really good coming up with two [kilometers] to go with the last KOM, took off, and one Medellín guy was just glued to my wheel,” Hoehn said. “We took it all the way to the end and I fought as hard as I could. The team played a huge role today in everyone’s success.”

Sevilla maintained second place on GC. He said he and his team tried to gain time where they could, but Elevate-KHS Pro Cycling and Piccoli proved to be too strong. 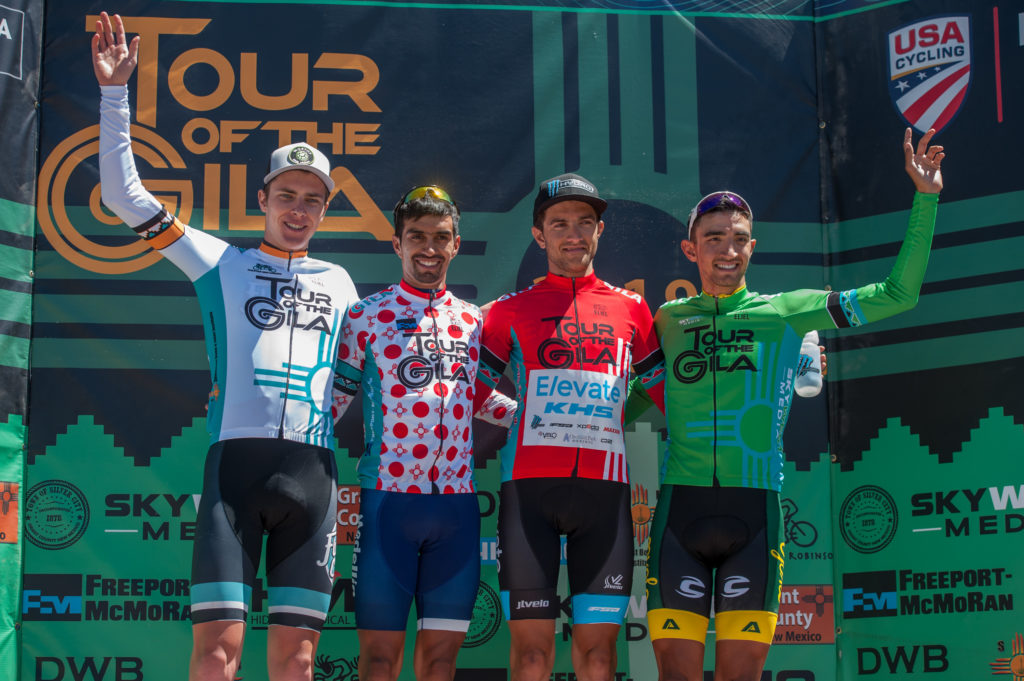 “I’m really happy not only for me but for my team because my teammate Cristhian Montoya won the stage and the KOM jersey and our team won the team classification,” Sevilla said in Spanish. “We couldn’t win GC, but we tried as an aggressive team at Tour of the Gila, and we’re really happy with that. We had three goals — to win the stage, the KOM jersey and the team classification, and if we could, the GC. But Piccoli was very strong and he defended solo at the end. But we’re really happy with that and we will be sure to come back to race again.”

Piccoli said his team knew that when it came down to the tough climbs, he would have to take on the responsibility of keeping the jersey.

“There were a lot of attacks, but I knew that if I kept riding a strong tempo, which I knew I could, it would be really hard for people to make big time gains,” Piccoli said. “So luckily whenever people attacked, I just kept calm and kept my head and rode a pace that’s hard enough for people not to get time.”

He thanked his teammates for being a dominant force at Tour of the Gila.

“In all aspects of the Tour of the Gila this year, our team was spectacular, in supporting my GC hopes, in shouldering responsibility of riding for the jersey, in the crit, in the time trial,” Piccoli said. “We were pretty dominant this week, it’s so cool to see the team have success in GC and in other areas. It’s so, so special.”