“Right at the beginning I knew that my legs felt really good, then it became a mental game of pushing up the hills and staying as aero as possible on the descents,” said Thomas, whose win moves her up to second on GC. “It does take hard work and a little luck and everything came together today.”

As usual, the out and back Tyrone time trial was met with blustery winds and rolling terrain allowing little to no room for error for the GC contenders, separated by just seconds.

Alison Tetrick was one of the early riders to claim the hot seat with a time of 40:52, but the Cylance rider was quickly replaced by Brianna Walle (Tibco) who rode the course 1 minute and 7 seconds faster. Walle’s teammate, Kate Buss did a stellar ride to slot into second, but the results changed as quickly as the last few riders on GC came through the finish.

When Thomas completed her ride, her time was good enough to stand against 2015 winner Lauren Stephens, best young rider Ruth Winder and eventually Wiles, who nearly caught her teammate, Katie Hall, at the line.

“This is a really hard time trial,” Wiles said. “I haven’t done it in five years and that year I flatted so I wanted to redeem myself. Before the race, I talked to my coach about a pacing strategy. I think I executed it pretty well. I may have gone a little too deep because on the downhill before the finish I was just dying. I lost that top spot on the podium by 5 seconds, which hurts a little, but I’m really excited for the rest of the race, and we’re really confident.” 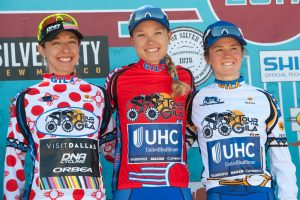 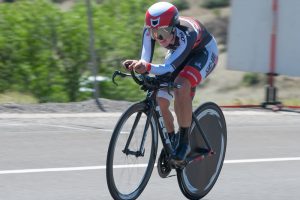