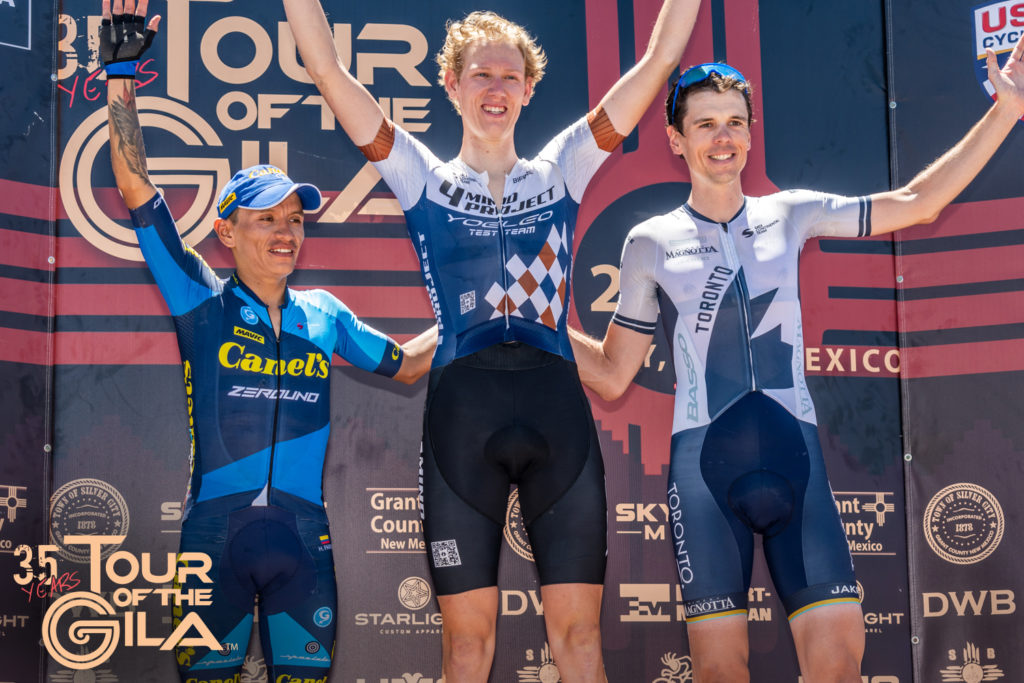 An all-international podium marked the return of the UCI Men’s Tour of the Gila Wednesday after a two-year pandemic hiatus: A Norwegian, a Colombian and a Canadian bested a 76-man peloton up a brutal climb to Mogollon on Stage 1 of a five-day race.

Torbjorn “Toby” Andre Roed (Yoeleo Test Team p/b 4MIND Project) from Norway, made his move with less than one kilometer to go after lying in wait until the steepest part of the climb. He passed Heiner Rodrigo Parra Bustamante (Canel’s ZEROUNO) from Colombia and Matteo Dal-Cin (Toronto Hustle) from Canada, who took second and third place, respectively.

“My tactic was to just sit in and save as much energy as possible,” said Roed, who will hang onto the general classification, or overall leader’s jersey going into tomorrow’s stage. “I had some good teammates that helped me get up toward the end there, and they did a pretty good job. I sat in, I played it cool, and let everyone else have their fun. About 1.3 kilometer to go, two guys tried to go up the road and I followed. Right at the steepest part I went a little bit harder and dropped them and kept it going all the way to the end.”

The men’s field of riders was much like a blank slate to many as new and young talent emerged over the two-year, COVID-19 gap when the Tour of the Gila — one of the only remaining international professional cycling races in the U.S. — had to cancel for safety reasons.

Some riders arrived in Silver City hot off another five-day stage race in Redlands, Calif. where they were able to get a glimpse of the competition, but a shift toward the unknown was still in the atmosphere as the group rolled out onto the 92-mile course. 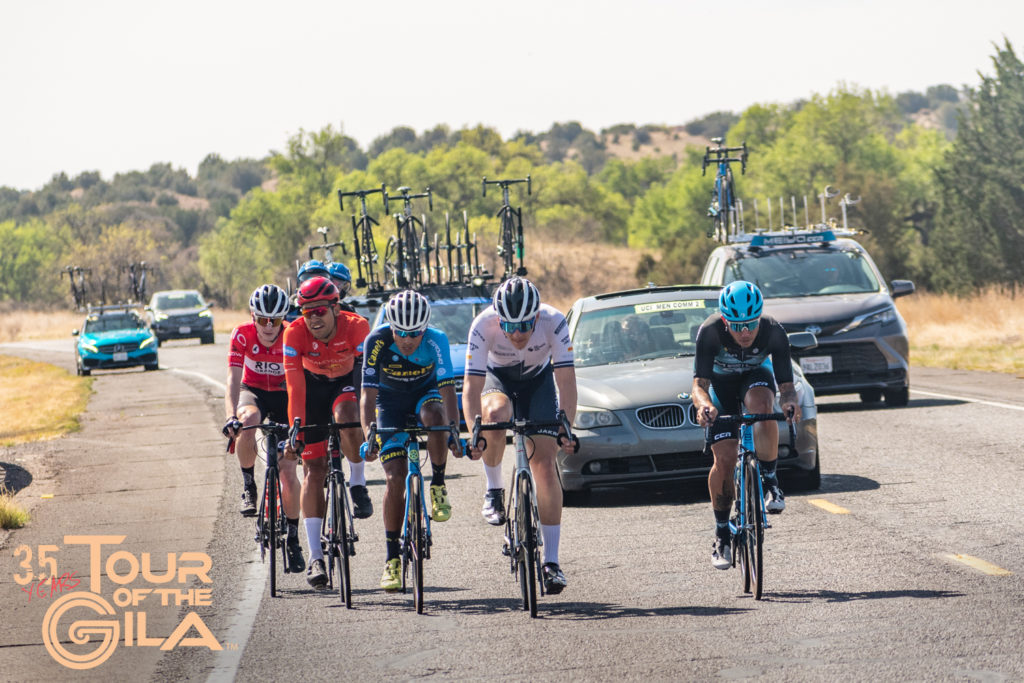 The break extended its gap to over three minutes before the peloton reeled them in to a safer time of two minutes and 30 seconds.

As he took the most points for the sprint, followed by York and Hamm, he blew up the break, causing York and Hamm to fall off and taking Santos Moreno and Aguilera Garcia with him. The three riders managed to hold a gap on the peloton until 6.7 miles to go, virtually the base of the final climb.

All told, the break in some form, stayed away for around 70 miles.

“We got to about three minutes, and then it started to come down, with heaps of racing to go so, and we don’t know any riders here so, I wasn’t sure if there was the best climber in the race or something with us, so when we got to the second sprint, I went for the sprint, and basically just kept sprinting to force the group to try to move the time gap up a bit,” Volkers said.

Once the peloton gobbled up the three riders, it was anyone’s race. Teams, including Project Echelon, whose Tyler Stites won the leader’s jersey at Redlands, amassed at the front, as did CS Velo Racing, which includes 2020 Everesting world record holder Sean Gardener. 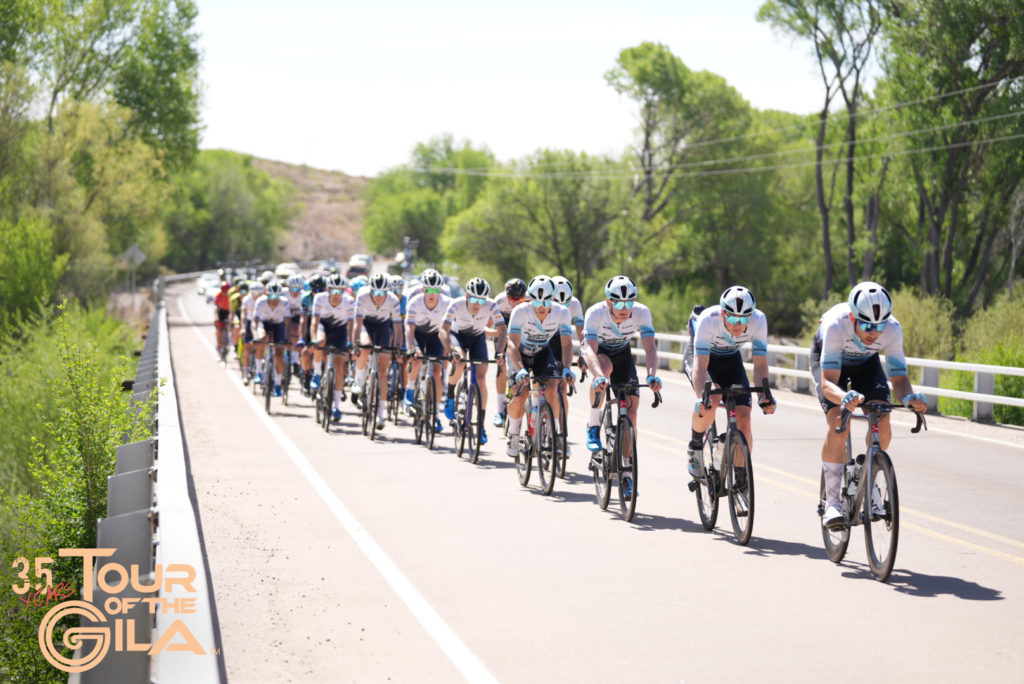 Photo Caption: Project Echelon amassed at the front heading into the final climb

“We were hoping for a top result today, and me, Gardener and Cristhian [Ravelo] can all climb quite well,” said Alexander White (CS Velo), from New Zealand. “We went in protecting all three of us. A couple of the boys did really big shifts coming into the climb to keep us protected. Strong climbers [are] here so we couldn’t pull off the big result, but we’re all on to Day 2 with as much time, and looking to come back throughout the week.”

As the kilometers ticked away up the final climb, which reaches a 11% gradient at its steepest point and averages 7%, Canel’s ZEROUNO Parra Bustamante and Toronto Hustle’s Dal-Cin crept up to the front, getting ever-so-tiny advantages.

In the final kilometer, Roed launched, separating himself from Parra Bustamante and Dal-Cin, who also had small gaps between them. The two chasers ran out of road and just short of Roed.

“It was a really tough stage – my team worked really well together,” Parra Bustamante said in Spanish. “We really wanted the victory at the end but I wasn’t lucky, and I was up against a really strong competitor. At about 150 meters I wanted to go for him but I didn’t have anything left. Each second is important for me, and at Gila there are various tough stages and tough competitors. I will do my best to try to get closer to the GC win for my team.” 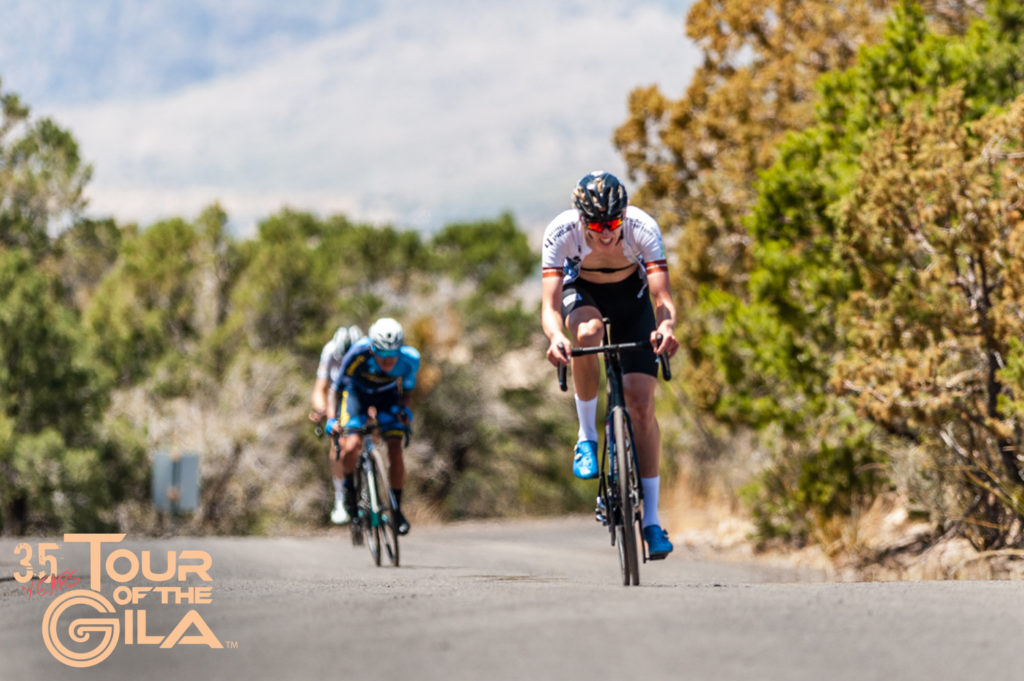 Photo Caption: Toby Roed makes a final push toward the finish for a victory 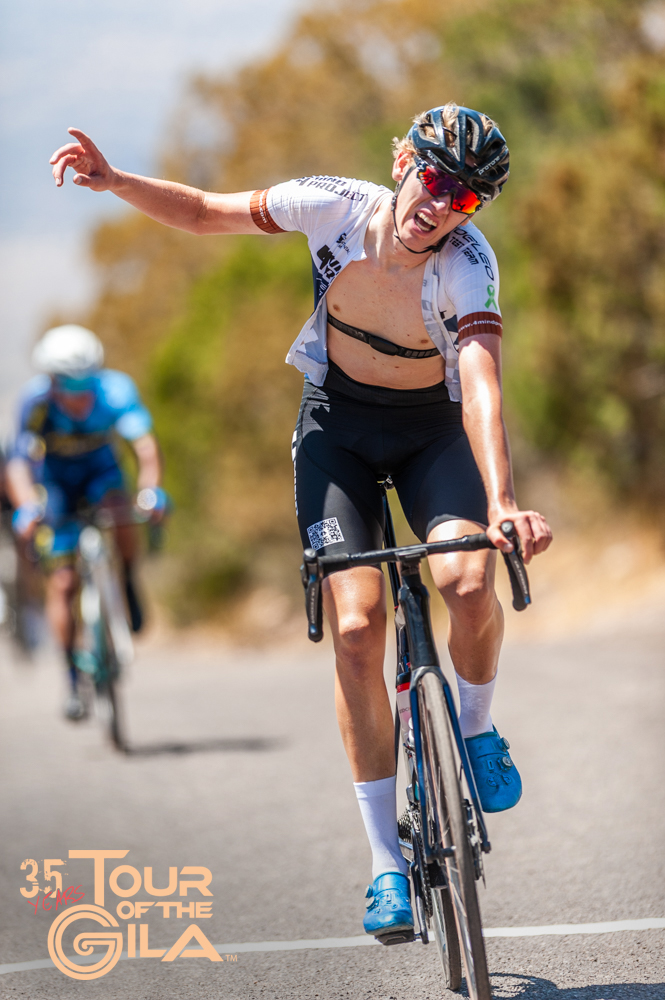 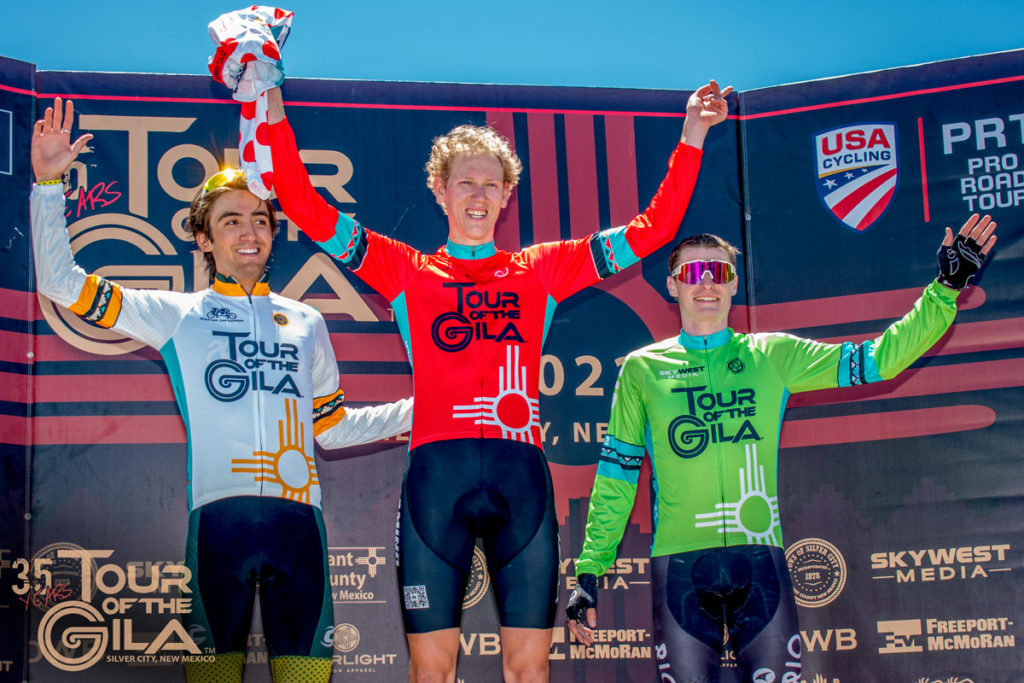