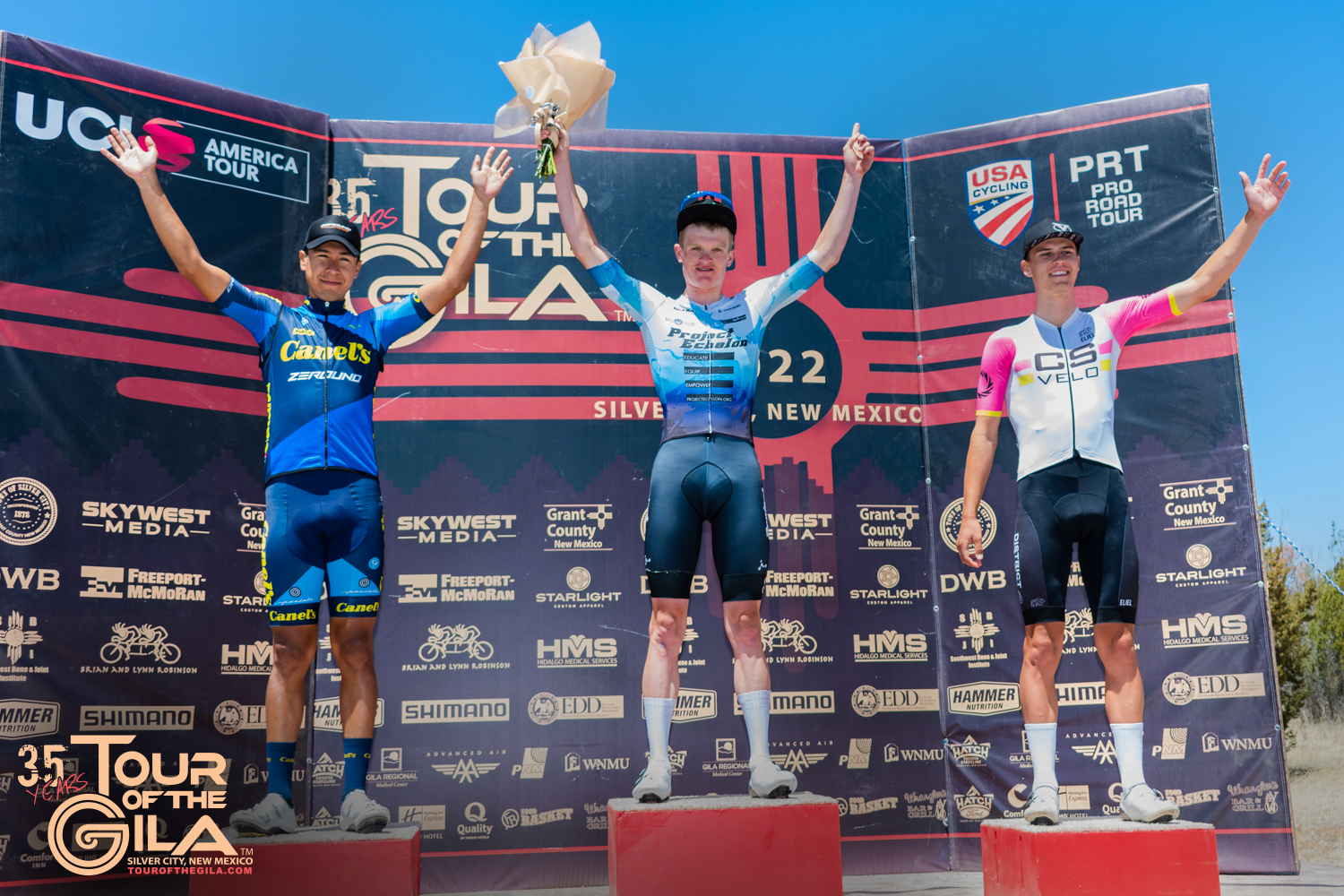 An action-packed UCI Men’s Stage 2 Tour of the Gila on Thursday made for some finish-line fireworks with Tyler Stites (Project Echelon Racing) sprinting into Fort Bayard for the win and a time bonus of 10 seconds, but the top three overall leaders stayed put, for now.

Stites, the recent Redlands Bicycle Classic overall winner, inched a tiny bit closer to the red overall leader’s jersey, bringing his gap down to 42 seconds and moving into seventh place.

“Today’s stage was pretty dynamic – you have the climbs and the flats, and it finishes with the flat sprint,” Stites said. “We were looking to put the leader under pressure, and then we ended up chasing the break to bring it back, and Canel’s helped as well, and we ended up catching him right at the end. It came down to a sprint, which I like sprinting, so that worked out, and I got a few bonus seconds which will help in the [general classification] as well.”

The Fort Bayard Inner Loop Road Race p/b Brian & Lynn Robinson/SW Bone & Joint Institute, a 76.2-mile course with everything from rollers to steep ascents and descents to a flat sprint, provided plenty of opportunity for teams to execute their game plans, and the action started shortly after the flag dropped. 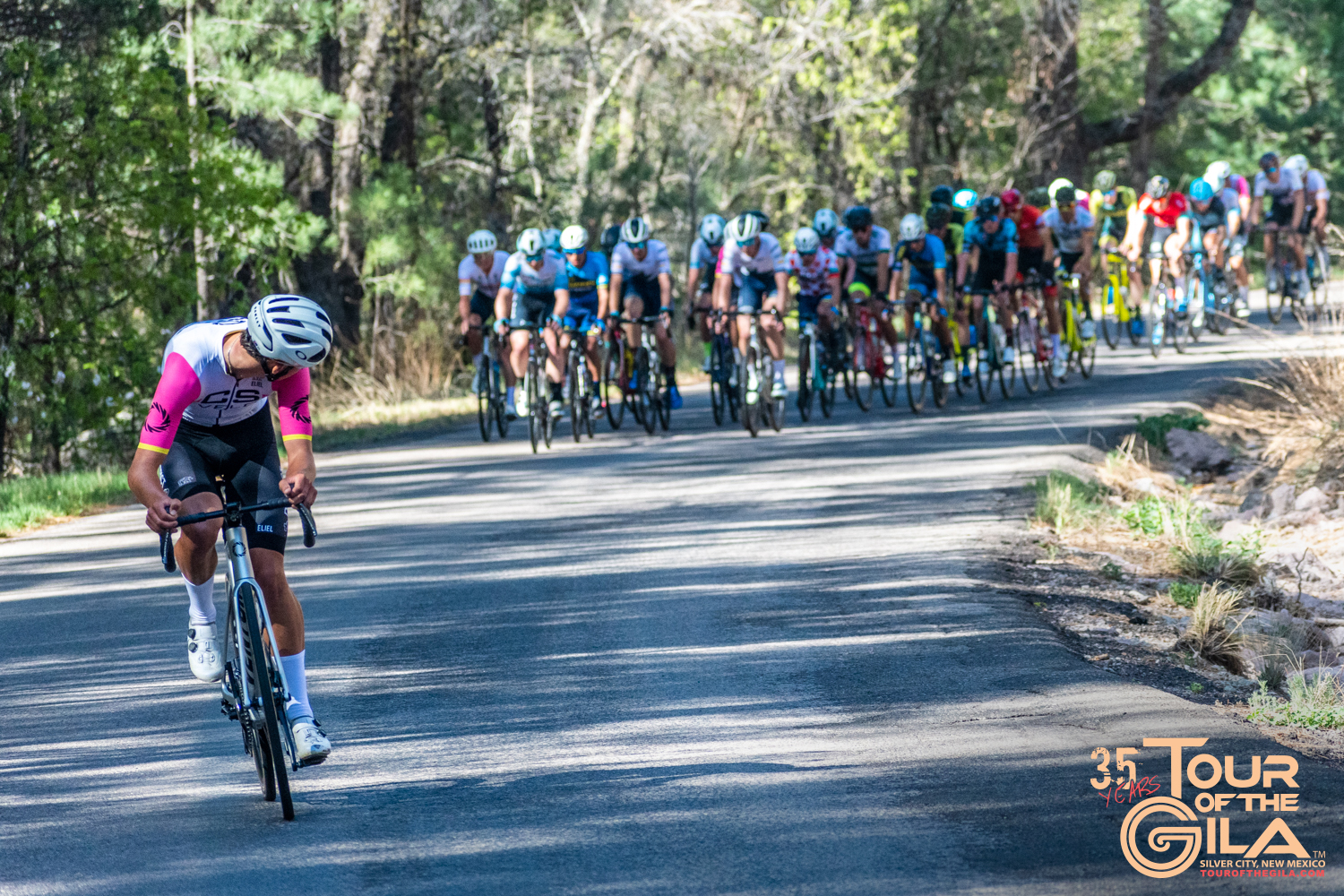 Xander White looks back at his gap on the field

The escapees filed back into the peloton, but at about 17 miles into the race, White again took off in anticipation of the next KOM points, just a few miles up the road. He gained a 25-second gap and reached the top first, with Parra Bustamante next, followed by teammate Eduardo Corte Cordero (Canel’s ZEROUNO) and Jordan Cheyne (Project Echelon Racing). 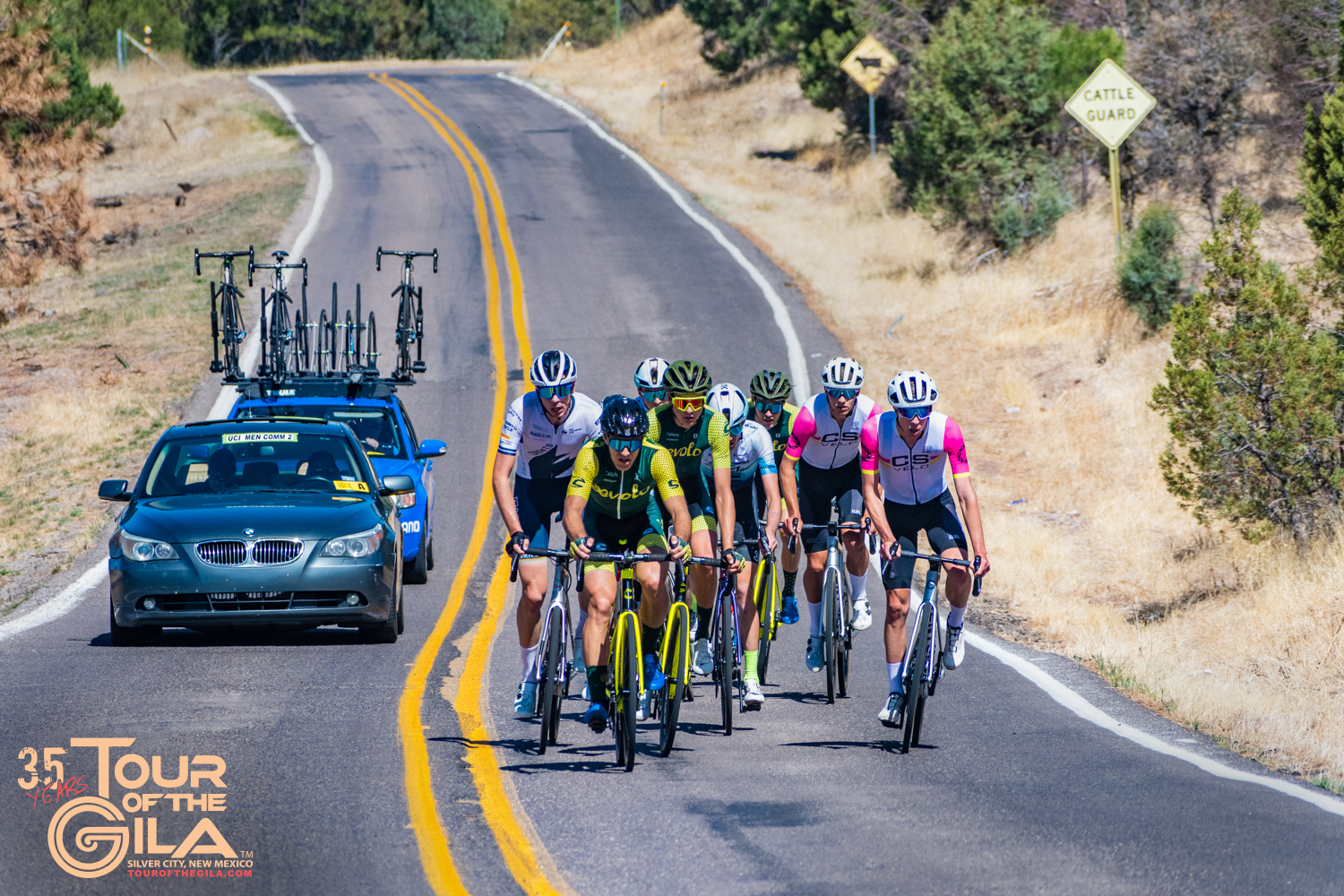 Main breakway group of the day tries to maintain its lead

“CS Velo was being super aggressive on the first two climbs, and we got up the road,” Dal-Cin said. “They were super committed to it.”

The break gained two minutes on the field around the race’s halfway point, and the nine pushed hard to keep the gap going and to try to increase it. But others in the peloton who didn’t make the selection, such as Canel’s ZEROUNO and Project Echelon Racing, had other ideas.

“Unfortunately, not many of the other guys were keen to do much work up there, so we kind of got stuck there at two minutes,” Dal-Cin said. 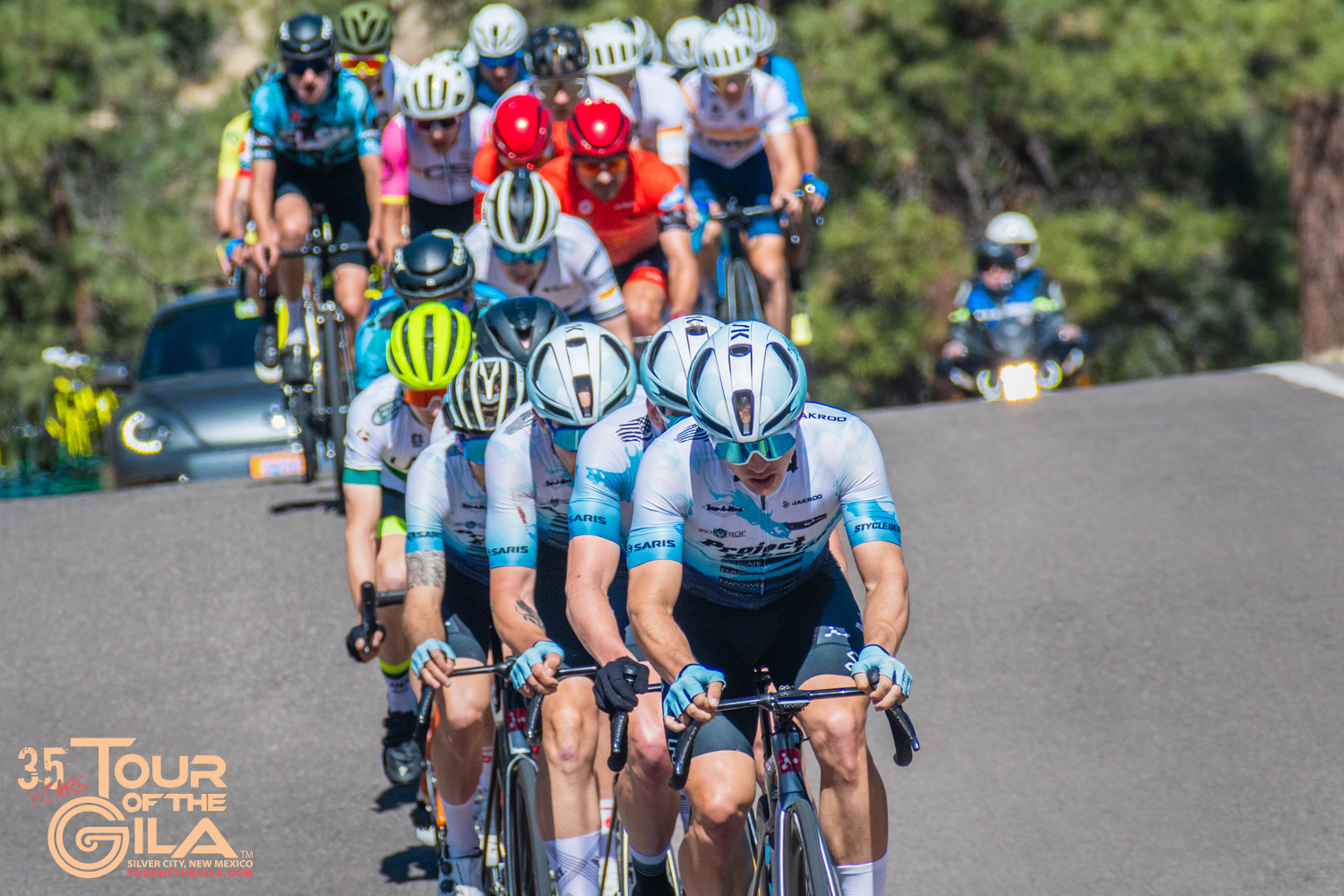 The gap began to decrease as the wind began to increase, and Shipley dropped back to the main field. White had a flat, leaving Gardner to fend for himself. Meanwhile the peloton suffered a split in the wind, and a larger group got away and made its way to gobble up the break.

But at 7.5 miles to go, the group was all back together, and the final attacks began toward a sprint finish. Although nothing stuck, riders picked wheels and set up their best effort for the line.

Stites crossed the line first, and although Prado Juarez and White both suffered mechanicals earlier in the race, they managed to take second and third respectively. 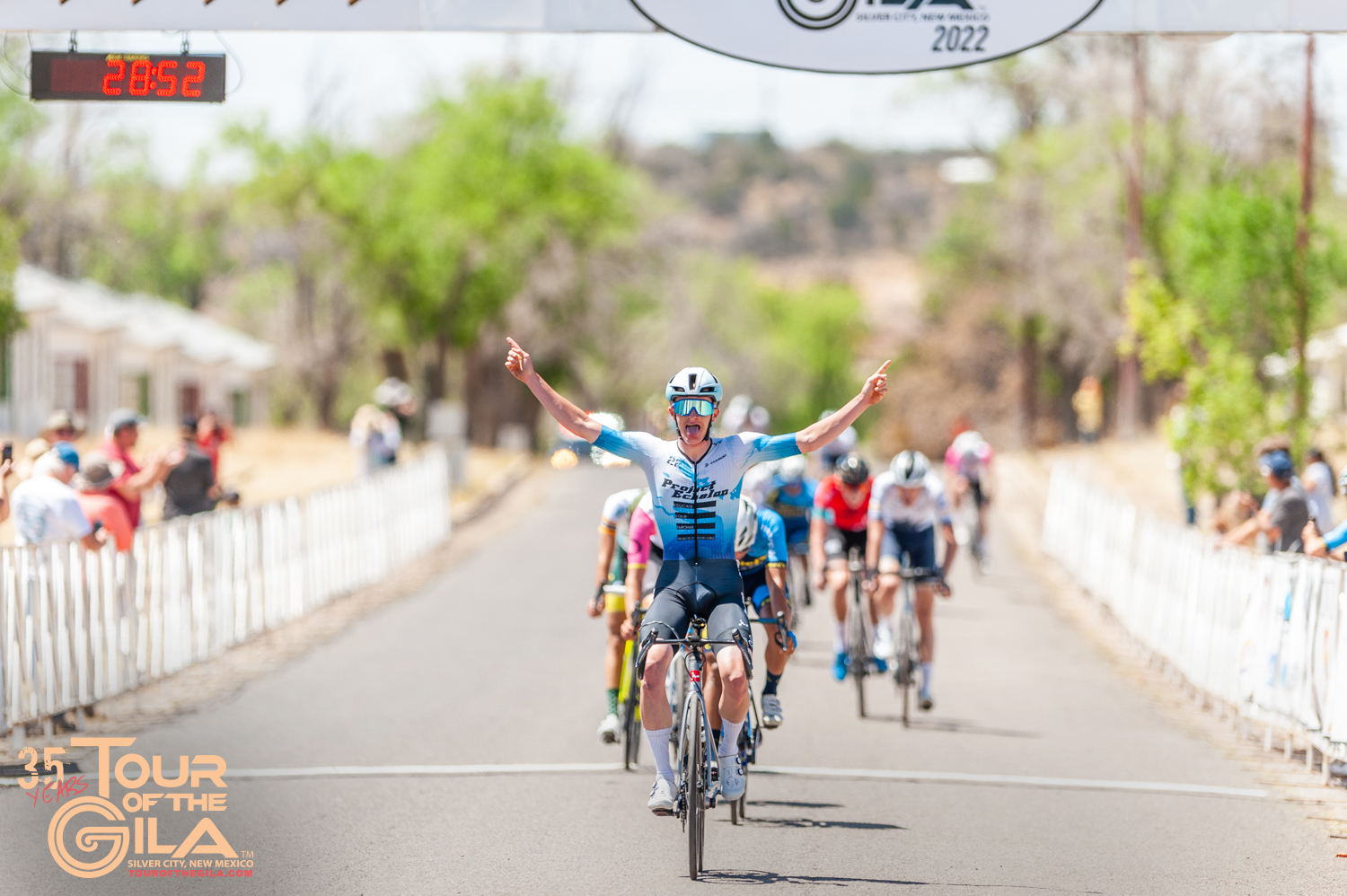 Tyler Stites crosses the line on Stage 2 for the win

“I’m really happy and grateful for my team; they did everything at the end,” Prado Juarez said in Spanish. “The strategy was one guy in front, and it worked, thank God. I’m happy with my team and my family. I’m thankful for them also because they give me a lot of motivation to ride hard.”

White nearly made something happen at every point on the course from winning a KOM, picking up sprint points, making it into the break and getting on the podium.

“I’m pretty gutted,” White said. “I really wanted to win today and threw the kitchen sink at it, but it didn’t work out.”

Tomorrow’s 16.15-mile Tyrone Individual Time Trial likely will shake up things for the overall standings as teams prepare to strategize for the final two days of racing.

“I was definitely a little tired after yesterday’s effort but managed to hang on,” said Toby Roed (Yoeleo Test Team p/b 4MINDPROJECT), who kept his red leader’s jersey after Stage 2. “For tomorrow, the TT is going to be a very hard day. I’m excited to get on the TT. I think it’s going to be a good day, and hopefully I’ll get to keep the jersey as well tomorrow.” 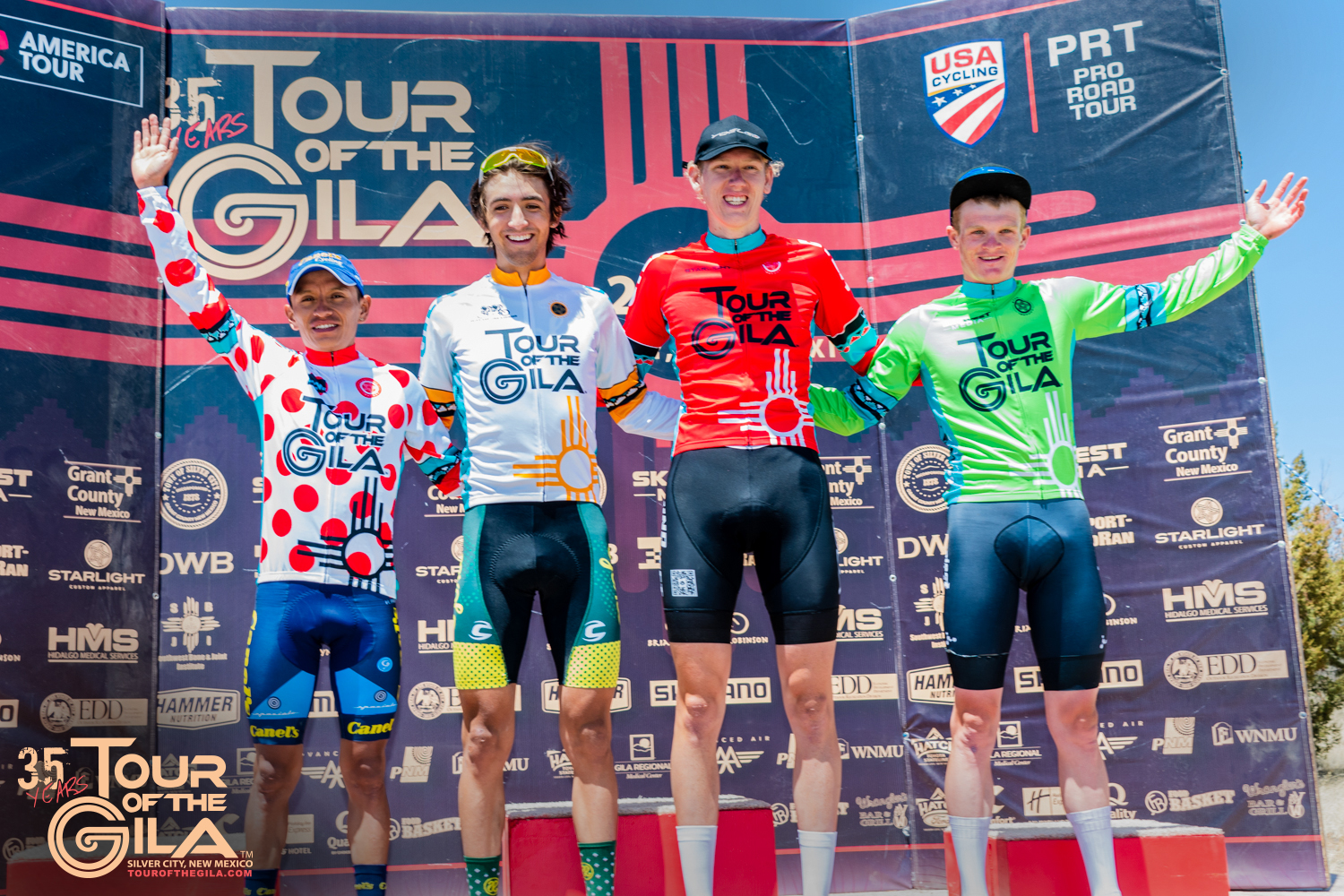