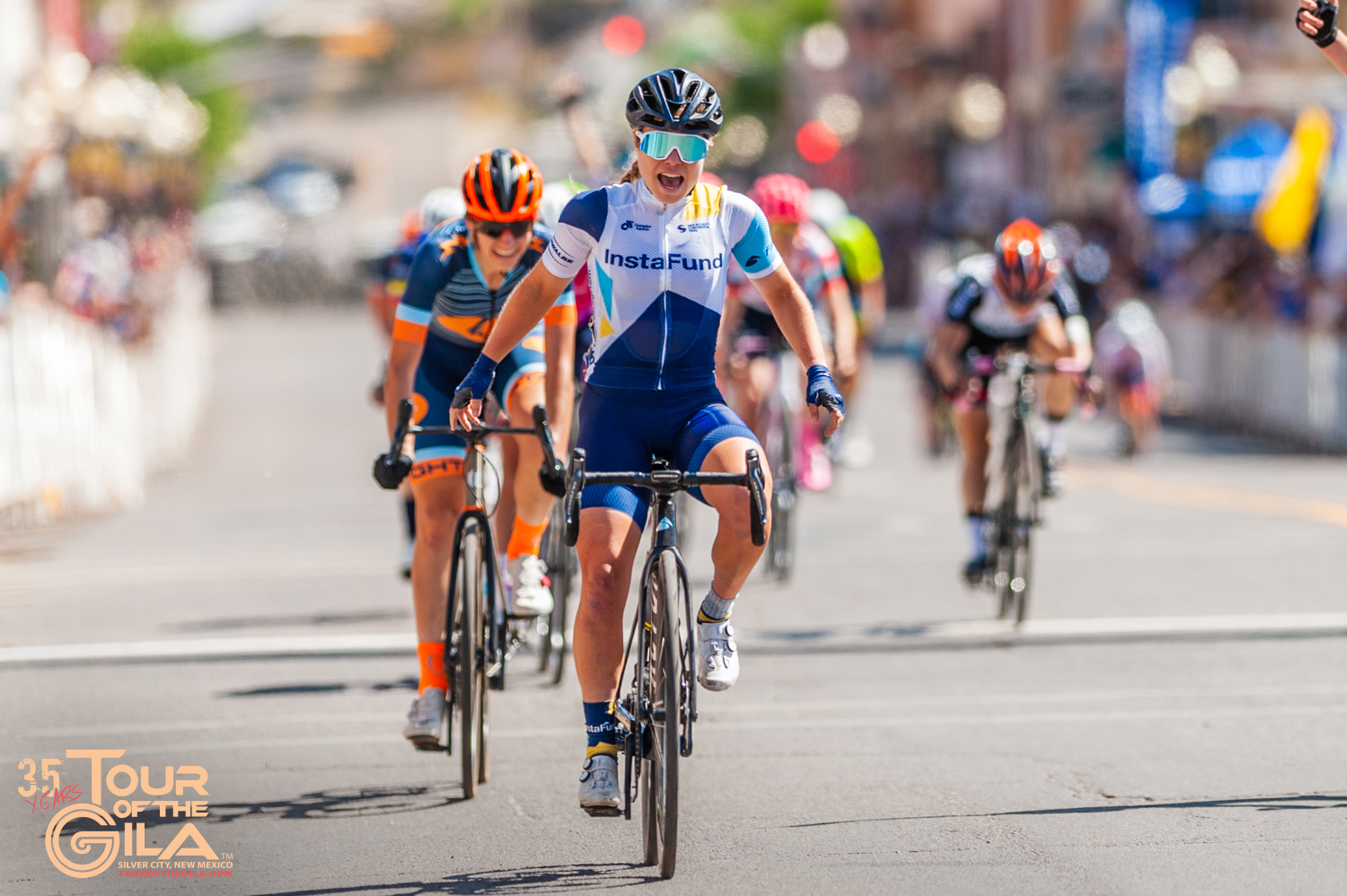 Lauren De Crescenzo (CINCH Rise) and Krista Doebel-Hickok (EF Education-TIBCO-SVB) still only have 14 seconds between them even after both went down in the mayhem.

“I crossed the line in first, and I think that was as big of a shock to me as it was to other people,” Ward said. “My team protected me all day long, and I hid from the wind and I felt comfortable and confident the whole race. My teammates were there for me every step of the way.”

The 27-mile, 25-lap crit stayed mostly tame before attacks began flying to pick up intermediate-sprint, or prime, cash prizes. About five laps into the race De Crescenzo, Doebel-Hickok, DNA Pro Cycling’s sprinter Maggie Coles-Lyster, who was a race favorite, and others hit the pavement.

De Crescenzo and Doebel-Hickok rejoined the race, but Coles-Lyster hit her head and had to abandon.

“Today was our day,” Coles-Lyster said. “We have been racing crits all last year. I was really excited about this, but unfortunately there was a crash, not too long into the race, maybe on Lap 5, and a rider hit something in the road and ended up on her top tube and crashing, and it was just unavoidable for me. I hit her as well, I went down, my body’s mostly OK, but I hit my head, and so I pulled myself from the race, mostly as precautionary.”

At 18 laps to go, a bonus sprint was up for grabs and Holly Mathews (CINCH Rise) got to the line first, picking up points and a small time bonus, but most importantly, making sure Doebel-Hickok didn’t. Mathews again picked up second-place sprint points and a bonus on the second bonus sprint.

“Kind of crazy day out there in the crit here in downtown Silver City,” Mathews said. “It seemed like it was pretty aggressive most of the day – had some people going for some sprints, mixing it up out there. It was a nice fast last corner into that false flat uphill finish with a nice little tailwind. It was kind of carnage on the road, lots of crashes, fast pace today, so [I] hope everybody’s OK and can heal up for tomorrow.” 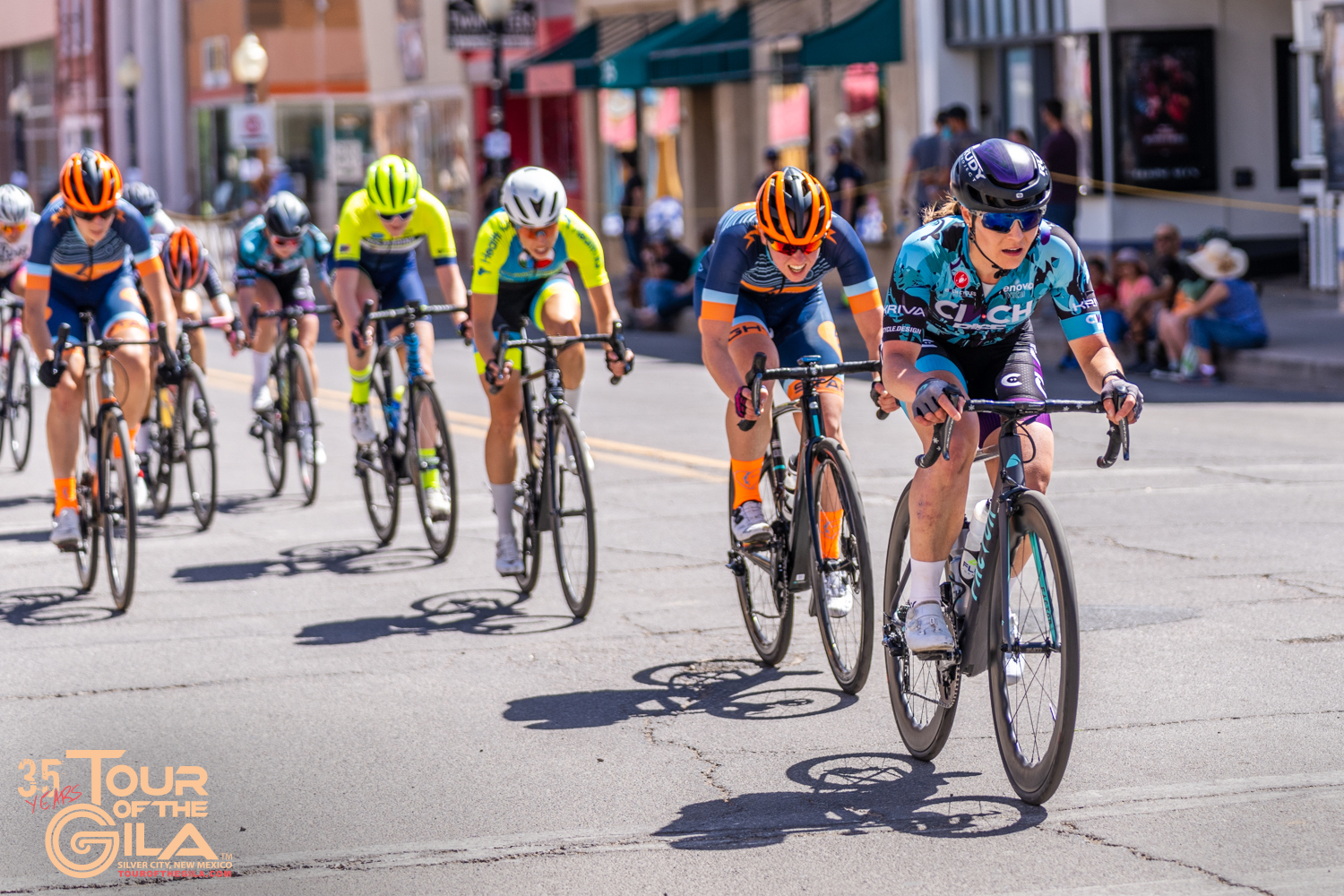 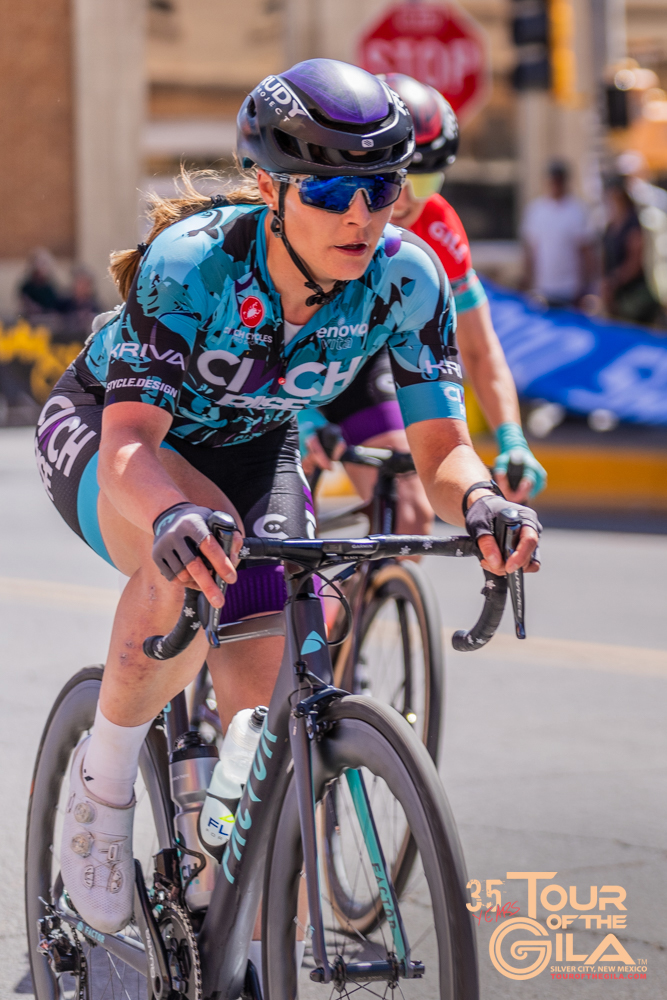 Ward, who was down 10 points and in fifth place for the Sprinter jersey, gained one point on the second sprint and picked up 15 points at the finish line for her win, moving her into first place in that competition. She also sits in third place for the overall race lead two minutes and four seconds back.

Peñuela, who continued to race without realizing what had happened, mixed it up and raced for sprint points, but later was deemed ineligible for those points by race officials and given the time of the rider with whom she would have finished, putting her at 12 minutes and seven seconds back on the overall lead, losing over seven minutes and knocking her down to 12th place.

De Crescenzo and Doebel-Hickok and their teams kept each other in check throughout the race, mostly on the front of the field.

“So we knew that there would be crashes in this race, and we knew that it would be fast and hard, and a lot of time gaps, so our goal was to stay safe and not get a time gap,” Doebel-Hickok said. “Yeah, I went down pretty hard, but fortunately nothing is broken, and I’m totally fine to race tomorrow.” 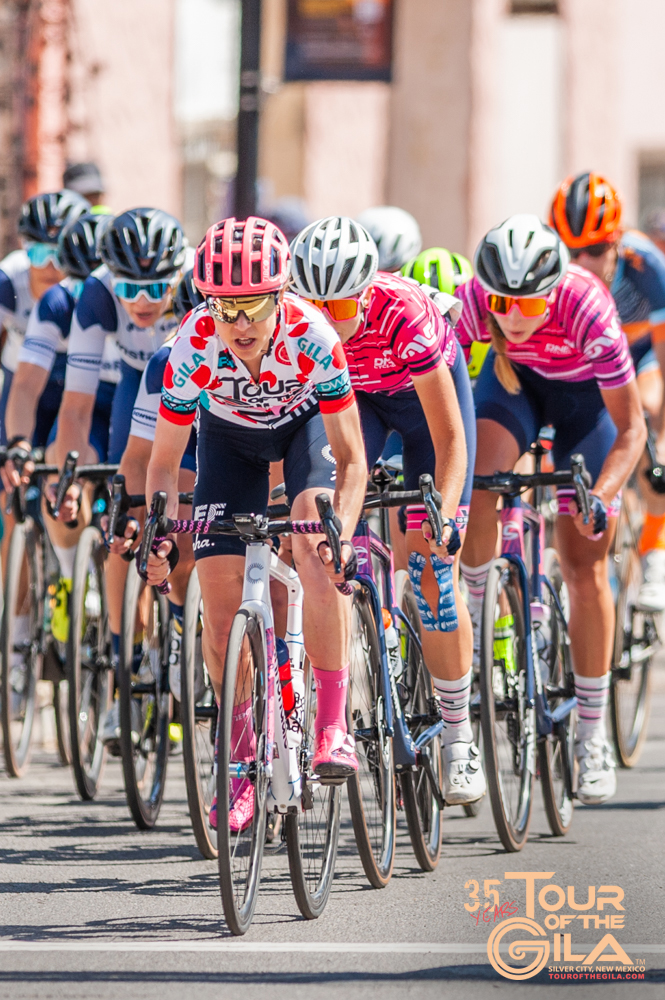 Krista Doebel-Hickok went down in a crash, but will still fight for the overall lead on Sunday 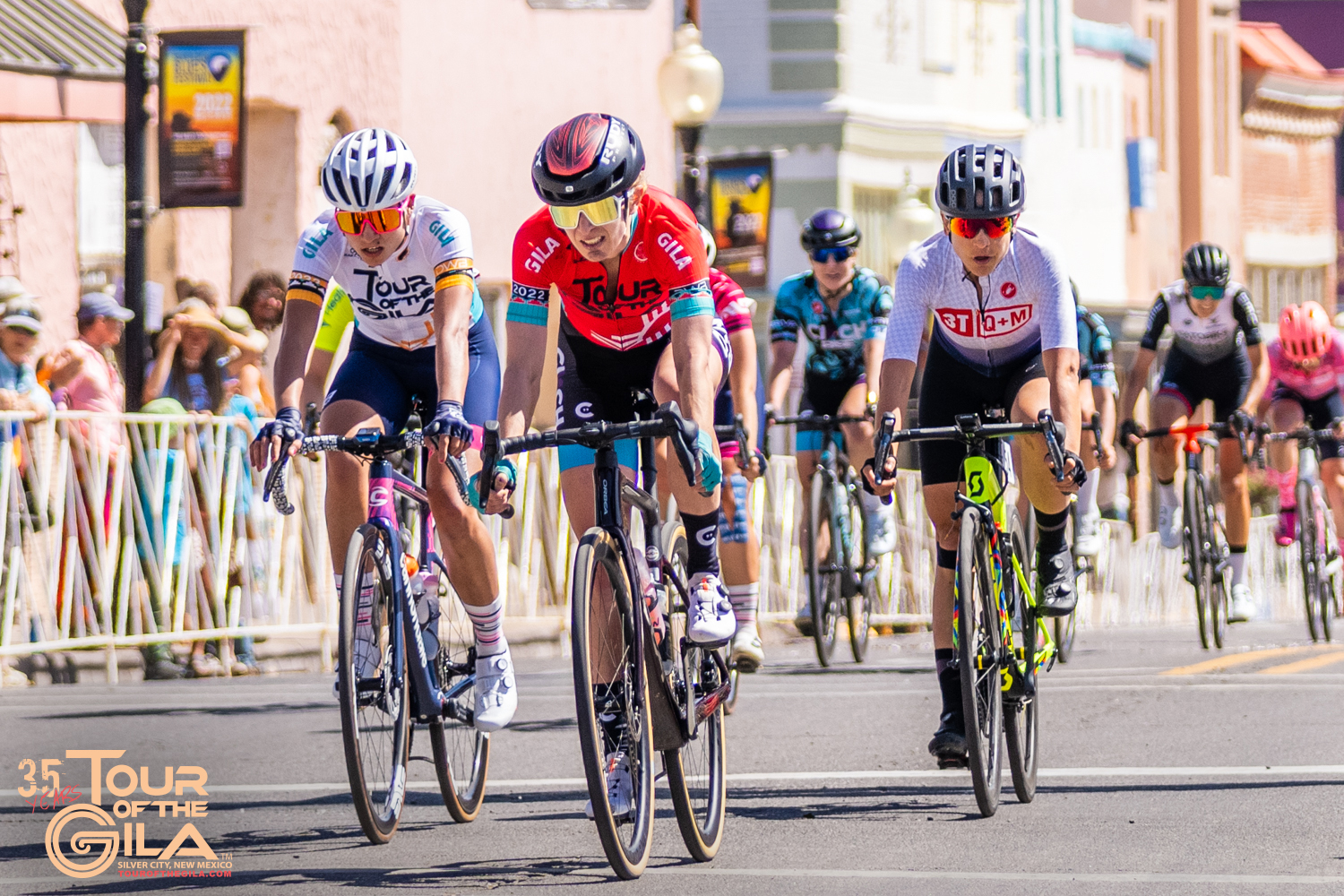 But in the end, Ward made a final push for her team’s sprinter, Rylee McMullen from New Zealand, although Ward ended up getting to the line first, with McMullen taking second and Austin Killips (Amy D Foundation) in third.

The final Stage 5 Gila Monster Road Race presented by SkyWest Media will be decisive for the general classification red leader’s jersey. The 65.9-mile course gains 5,610 feet of climbing and the steepest climb tops out at an elevation of 7,473 feet with three opportunities to gain points in the queen-of-the-mountains competition.

Although De Crescenzo and Doebel-Hickok both have over a two-minute lead on their closest competitors, anything can happen in a bike race. Big names like Ward, Killips, and current Best Young Rider Anet Barrera (DNA Pro Cycling Team) from Mexico are breathing down their necks and have the climbing abilities to make something happen. 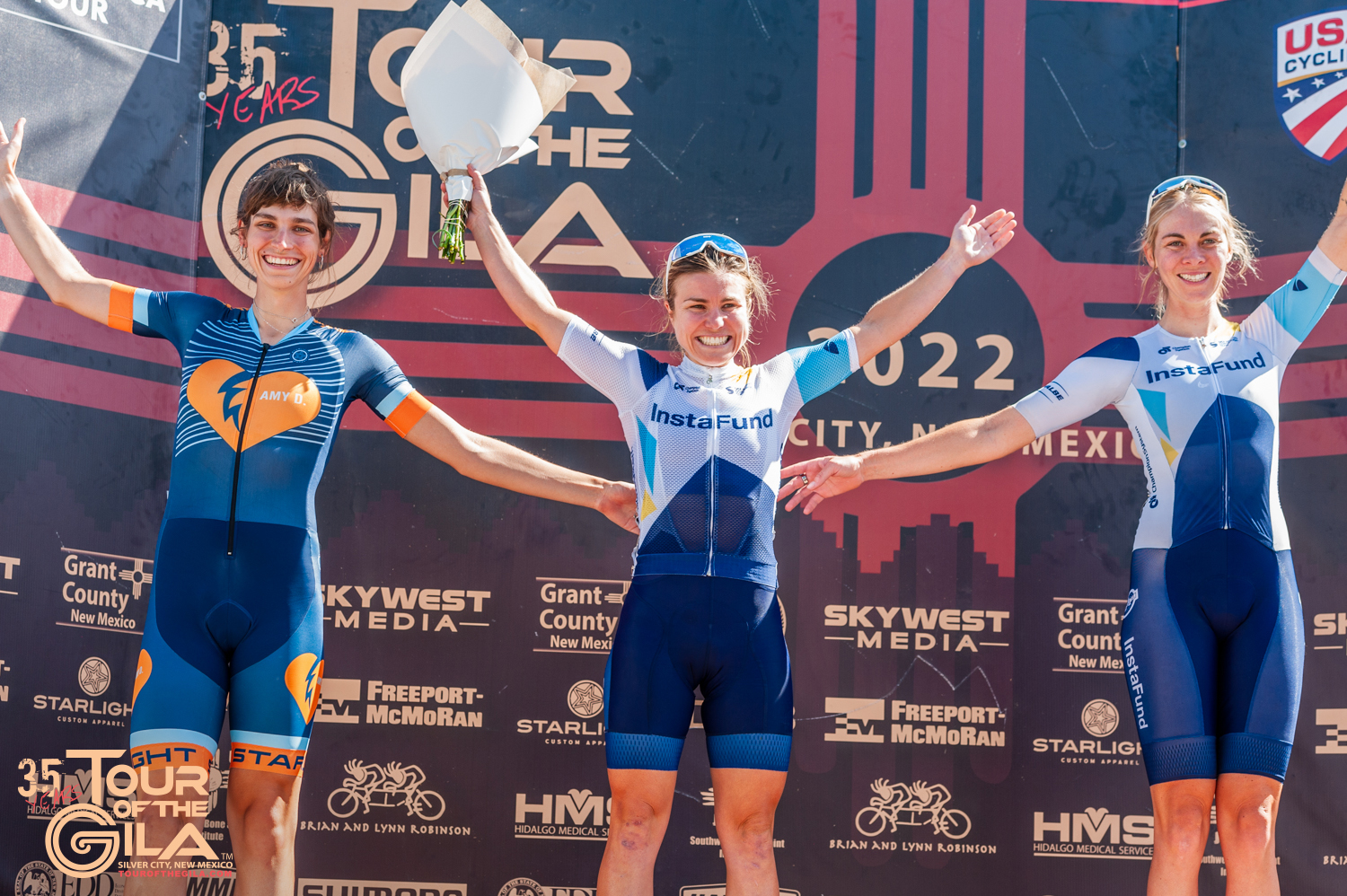 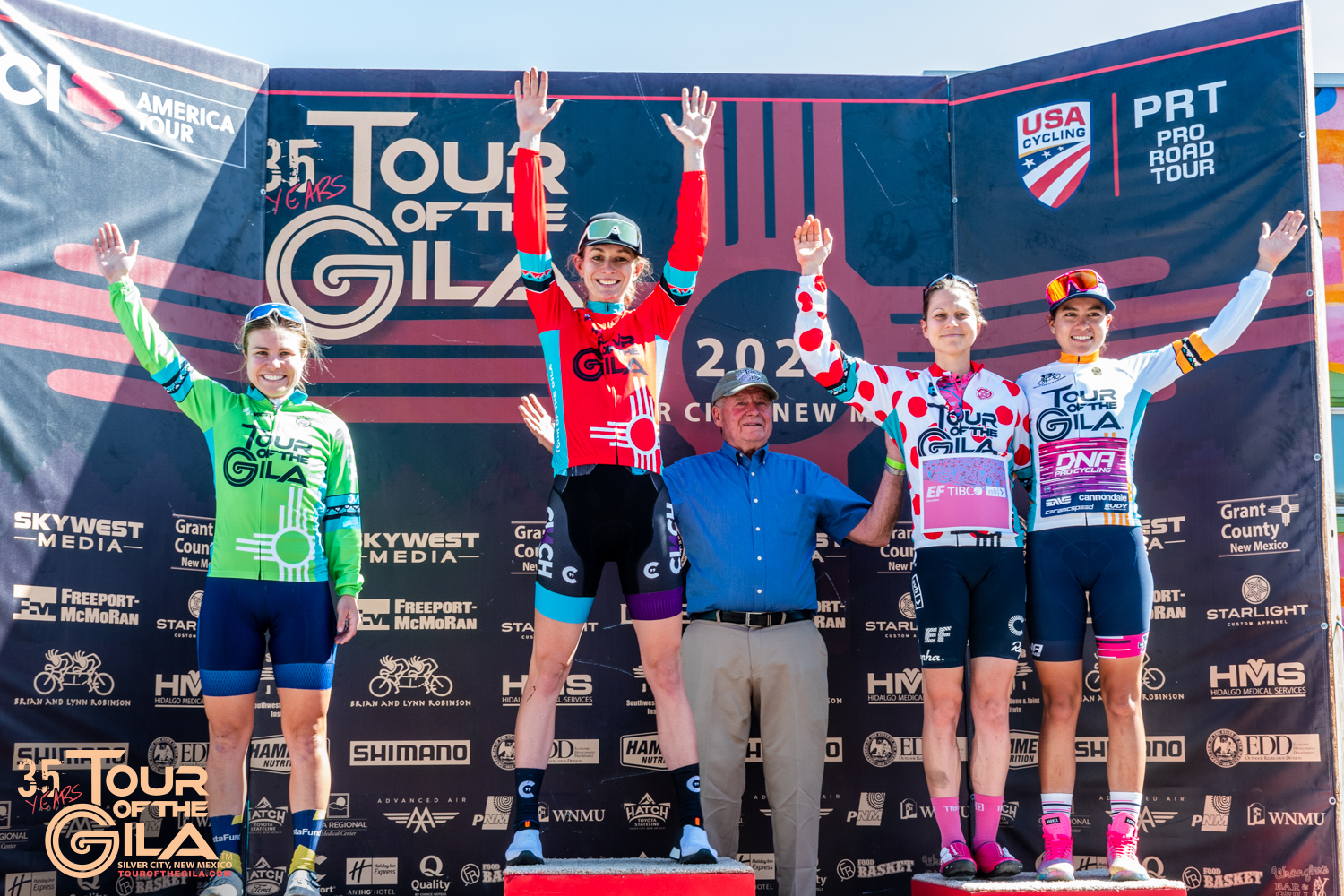