(Pinos Altos, NM) – Rob Britton of Rally Cycling captured his second Tour of the Gila victory, arriving in Pinos Altos with close to a minute lead over Gavin Mannion of UnitedHealthcare, who won Stage 5 Gila Monster ahead of Britton and Rally’s Kyle Murphy. Axeon Hagens Berman finished a successful week winning both the sprinter classification with Chris Blevins and best young rider classification with Sean Bennett. Canel’s Specialized Oscar Sanchez retained the KOM jersey. UnitedHealthcare won the overall team classification for both the men and women.

“The team did such an amazing job, it’s hard to take too much credit. They kept me safe, protected and did exactly what I needed to put me in a safe position,” Britton said.  “This is probably one of my favorite races, this is something I’ve been in the top ten in nearly every time save for maybe once. Last year I won the KOM. So this year its nice I was able to put the effort in on Mogollon finally, have a good time trial and seal the deal.”

A 15-man break escaped roughly 21 miles into race turning into the Mimbres Valley. Team represented in the break included Aevolo, UnitedHealthcare, Silber Pro Cycling, Canel’s, H&R Block, Rally, and Jelly Belly. They remained together up until the category 2 climb into the Cliff Dwellings when Canel’s drove the pace, splitting the field into pieces.

UnitedHealthcare and Canel’s fought for the KOM classification between Janier Acevedo (UHC) and Sanchez. The two were tied heading into the stage. Acevedo scored top points for the first Cat 3 climb of the day, but fell back to work for his team for the GC heading into the Cliff Dwellings. The Colombian attacked on the Cat 1 climb, to score the points securing his lead. The attack gained him close to a minute gap before Rally and UHC took up the reins and caught him with 20k to go, launching Britton and Mannion for the finale.

“The idea was to attack early because I was down close to two minutes on GC,” Sanchez said at the finish, finishing in the top ten. “I’m happy because we tried what we had intended. It’s better to try, than to have finished 4th on GC without doing anything. We intended to win but we’re happy with the results, it was a spectacular finish.”

UnitedHealthcare dominated the Gila Monster in the women’s race, with Diana Peuela Martinez winning the stage, 40” ahead of Katie Hall in second and Twenty20’s Leah Thomas in third. Hall clinched the title for the second year for UnitedHealthcare, after last year’s win with Tayler Wiles. Sara Poidevin (Rally Cycling) remained in second overall, with Thomas in third on GC. Rally secured the best young riders jersey for Poidevin and the sprinters classification with Emma White. Edwige Patel won the overall Queen of the Mountain classification.

“Today was one of the most impressive team performances I have seen,” Rachel Heal said, Director Sportif for UHC. “The break had enough numbers and strength to put us under real pressure but the girls rose to the occasion and showed huge strength and determination. Diana put in a truly incredible ride, stepping up to a new level, and Katie absorbed the pressure of being the pre race favorite, racing with a confidence that comes from trust in her team and her strength.”

Rally had been a mere 8 seconds back heading into the final stage.

“We were trying to put UHC under pressure the whole day, our whole team buried ourselves as much as we could all day, it was a true fight until the end,” Poidevin said.  “It’s great to come away with both the sprint and young rider jerseys. We worked really well together all week.”

The race held together for most of the day, before UHC’s Peuela’s attacked at 10k to go that launched her to the finish. Despite the GC loss, Rally were happy to head home with two jerseys.

“It’s early in the season, we’re only getting better,” White said. “We’re proud of this week. We didn’t quite come away with exactly what we wanted but we’re really, really happy.”   Article Contributor: Rebecca Reza 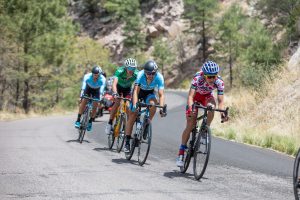 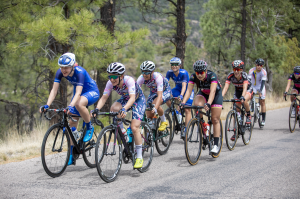 2018 Tour of the Gila Citizens Race

Thanks to all the volunteers and their countless hours of service to make this race possible.

Thanks to all the participants who became “Gila Proven.”